Solar Flare Effects: What Is the Impact of Geomagnetic Storms on Earth's Field?

A 'solar tsunami' was recently recorded back on August 26. The solar activity was theorized to affect an abnormal rate of flares emitted by the sun. The phenomenon produced some materials observed here from our planet, including massive waves of particles that possess high-temperature levels. These wave particles were thrown throughout our galaxy at a speed of over 900 kilometers per hour. According to Inverse, come of these specified particles could reach Earth's premises.

What is a Geomagnetic Storm? 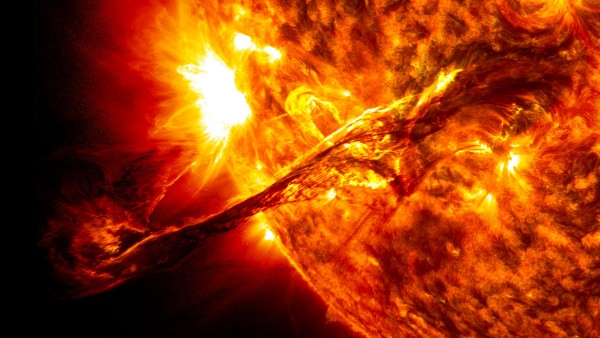 Geomagnetic storms and other impacts caused by numerous types of solar flares are still a mystery even for the best astronomers. The activities of the sun, its origin and emissions, and the effects inflicted on Earth are hard to predict, and even some of the attributes linked to the solar events do not provide definitive answers.

Geomagnetic storms do not bring down burning fires from the sun or abnormal thunderstorms and rainfalls. Instead, the kind of storm is a response to the anomalies expressed by the sun. The most observable effects of geomagnetic storms are the disruption of technological systems that heavily rely on signals such as internet infrastructures and navigation systems. As of today, there are no answers yet as to what type of solar storm occurred in the third quarter of the year.

The sun naturally emits a number of minor flares for every short amount of time. This set of activities does not create harmful impacts on our planet; however, major solar flares could send large ripples that affect Earth's magnetic field.

Effects of a Geomagnetic Storm

Among the biggest solar activities related to these flares are called coronal mass ejections or CMEs. These emissions are composed of powerful eruptions that could influence weather events in the void of space. CMEs produce hot bubble-like materials that contain gas that carries energized particles that, when blasted, could send magnetic flux at a speed of thousand kilometers. The outcome of the activities produces shockwaves that can spiral from the immediate perimeter of the sun up to the nearby planetary structures such as Earth. When it reaches a certain body, a geomagnetic storm could occur.

Geomagnetic storms are among observable activities correlated to Earth's own region of space called the magnetosphere. In optical effects, the storm could produce amazing light shows in the atmospheric regions of the planet called auroras. However, much of it could disturb many electrical power grids or infrastructures that heavily rely on signals, such as navigation systems. One of the most notable solar flares that were felt here on Earth was the 1972 event, where the geomagnetic storm disrupted almost all of the communication mediums available back then.