Denmark has a chilling tradition being conducted for almost 400 years now in the country's culture. The practice, also known as the Grindadráp, includes the mass slaughter of dolphins in the Faroe Islands. The recent celebration conducted just this year took the lives of 1,428 Atlantic white-sided dolphins, all for the purpose of meat and blubber fat that the local residents consume. 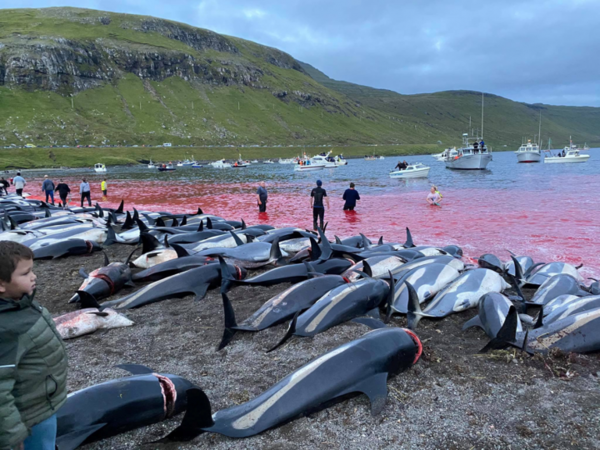 The Danish tradition Grindadráp involves driving the sea mammals to the shallow waters and near the shores for slaughter. The tradition is seemingly a sport for the locals, and this culture is not put to waste as the dolphins are being eaten right after the mass killing. But even though the dolphin-slaughter tradition has been a significant heritage of a 4-century-old culture, people at the Faroe Islands are now divided into factions, reviving the debates on ethical aspects of the ancient custom.

The dolphin killings in Denmark's North Atlantic Islands are not funded or supported by private enterprises or government agencies. However, the old tradition is authorized, giving the Faroe Island locals and even tourists a chance to participate in the annual sea mammal bloodbath. Even though licensed, the Grindadráp activity is still unethical and cruel from the perspective of environmental activists.

Faroe locals who are also part of the tradition are also concerned that the tradition being held for centuries might be halted or banned due to the recent counts that went overboard compared to the previous slaughters. The event was more significant than the usual killings and got out of control without normal supervision, according to ABC News.

The dolphin hunt was conducted last Sunday and was organized by the foreman of the Faroe Islands of Eysturoy Heri Petersen. According to the report, the foreman claimed that he was not informed of the dolphin killing activity and 'strongly disassociated' himself from the said event. Petersen added that amount of dolphins was too much compared to the people back in the Eysturoy. The annual kill count of the dolphins during Grindadráp does not exceed 1,000, and in the previous year, only a few white-sided dolphins were included in the event.

Faeroese Pilot Whale Hunt Association chairman Olavur Sjurdarberg said that they are concerned that the quiet and almost non-existent discussion on the dolphin killing would once again resurface, endangering their ancient tradition conducted by 18 collective islands between Iceland and Scotland.

The Sea Shepherd Global released footage regarding the Grindadráp event. The images released by the oceanic activist group included hundreds of dolphins lying on the island's beach and floating over the horrifying red waters. The Independent reported that there was also a video capture where dolphins that were not dead yet were being wrestled by fishers to prevent them from escaping. Some of the live dolphins far away from the shore are also blocked by the running boats to keep them in the vicinity of the slaughter area.