Researchers from the Skolkovo Institute of Science and Technology (Skoltech) and their colleagues from China were able to experimentally demonstrate superconductivity in cerium superhydrides.

The new study is expected to lead the way toward lower-pressure and even possibly room-temperature superconductors. In their paper "High-Temperature Superconducting Phases in Cerium Superhydride with a Tc up to 115 K below a Pressure of 1 Megabar" appearing in the latest Physical Review Letters, researchers discovered superconductivity in the phases CeH9 and CeH10. 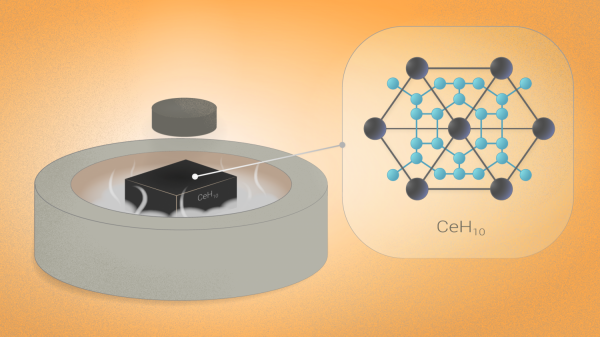 (Photo : Pavel Odinev/Skoltech)
Structure of cerium superhydride CeH10 synthesized by the researchers and shown to be a high-temperature superconductor.

The Hunt for Superconductivity

Superconductivity, the state at which materials virtually lose no energy as heat because they exhibit zero resistance, has been the subject of a growing number of studies. However, conventional means to attain the condition usually require extremely low temperatures - at most 135 K (-138 degrees Celsius or -216 degrees Fahrenheit) - or extremely high pressures.

While superconductivity was first discovered at the turn of the 20th century - starting with Heike Kamerling Onnes' study of mercury resistance at extremely low temperatures - it has made huge advancements over the last decades, thanks partly to technology making it easier to set up the required conditions and observe materials at a molecular scale.

A previous work, released in 2019, showed that LaH10 starts exhibiting superconductivity at -23 degrees Celsius and around 1.7 million atmospheres. Additionally, a 2020 study demonstrated how an S-C-H compound was found to also superconduct at a temperature of +15 degrees Celsius and 2.7 million atmospheres. Until today, researchers are working towards the "normalization" of superconductors, looking for materials and compounds that can exhibit this game-changing property close to room temperature and significantly lower pressures.

The new effort led Skoltech Professor Artem R. Oganov and Ph.D. student Dimitrii Semenok to team up with Professors Tian Cui, Xiaoli Huang, and Ph.D. student Wuhao Chen. Together, they were able to show superconductivity in CeH9, a cerium superhydride material they discovered back in 2019, together with the newly synthesized CeH10.

Oganov additionally explains that they were previously able to establish a "close relationship" between the superconductivity of hydrides and the periodic table and believing that it doesn't just apply to hydrides. He noted Lanthanum (La) and Cerium (Ce), describing them as "neighbors in the periodic table" and both creating high-temperature superconductors. However, there are still differences, LaH10 requires higher temperatures while CeH10 remains stable at lower pressures.

"Now we need to carefully think how to combine the elements to achieve higher-temperature superconductivity at lower pressures in ternary hydrides," explains Dimitrii Semenok. "We know which elements lead to higher-temperature superconductivity and begin to learn which lead to stability at lower pressures. These are the main notes, but it takes imagination to combine them in a melody."

RELATED ARTICLE: Researchers Fabricate Material That Has Both Quantum Hall Effect and Superconductivity

Check out more news and information on Superconductivity in Science Times.