Is There a 500 Light-Years Wide Giant Hole in Milky Way? Here's What Astronomers Found

Astronomers from Harvard University's Center for Astrophysics and the Smithsonian Institution found a huge void in space while studying 3D maps of the forms and sizes of molecular clouds.

The hollow, which is formed like a spherical, is around 150 parsecs (about 500 light-years) wide and is located in the night sky between the constellations Perseus and Taurus. The researchers describe how they believe the cavity was produced by old supernovae some 10 million years ago.

When the researchers discovered the huge hole, which they also refer to as a "bubble" in space, they were looking to learn more about molecular clouds, which are areas of space where stars develop. Shmuel Bialy, a postdoctoral researcher and the study's primary author explained in a statement that hundreds of stars are developing or already exist at the surface of this huge bubble. Researchers have proposed two possibilities: Perhaps a supernova exploded in the center of the bubble, pushing gas outward and forming the 'Perseus-Taurus Supershell.' And maybe it was formed over millions of years by a succession of supernovae.

Researchers detailed the findings in the Astrophysical Journal Letters, with the study title "The Per-Tau Shell: A Giant Star-forming Spherical Shell Revealed by 3D Dust Observations." 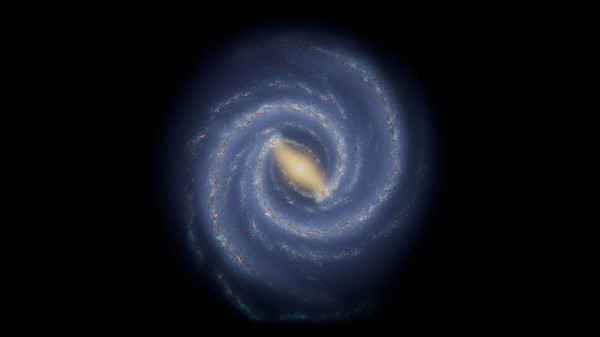 (Photo: NASA/JPL-Caltech)
This illustration shows astronomers’ current understanding of the large-scale structure of the Milky Way. Stars and star-forming regions are largely grouped into spiral arms. Measuring the shape, size, and number of spiral arms is challenging because Earth is located inside the galaxy.

The scientists think their data prove that the Perseus and Taurus molecular clouds are not distinct formations but rather originated from the same supernova shockwave. According to Space.com, Bialy explained that when a star dies, its supernova triggers a chain of events that may eventually create other stars.

Mapping objects in space is a difficult task, Science Alert said. It's very simple in two dimensions, but the third dimension - depth - requires a bit more effort. We have a variety of options, but there are still gaps in our understanding and numerous unknowns.

The researchers utilized data from Gaia, the European Space Agency's satellite observatory, to investigate the Perseus and Taurus molecular clouds. Gaia has been working since 2013 to map the Milky Way galaxy in three dimensions with the most depth and precision possible. It's one of the most effective tools we have for deciphering our own galaxy's architecture - and hence the history.

The researchers and authors of the article foresee a scenario where improved visual aids, such as their augmented reality presentation, make scientific results more accessible and entertaining. They also want to greatly improve people's knowledge of supernovae and the creation of new stars.