NASA's InSight lander has detected three of the most intense marsquakes ever, possibly providing scientists with a better understanding of Mars' innards.

SciTechDaily said the previous record-holder recorded by InSight in 2019 was magnitude 3.7, or approximately five times weaker than a 4.2-magnitude quake.

In November 2018, the InSight spacecraft landed near the Martian equator, with the mission of investigating the planet's interior like never before.

The major research equipment on the solar-powered lander are a burrowing heat probe and a supersensitive set of seismometers. InSight's communications equipment is also being used by the mission crew to accurately track the spacecraft's location on Mars. This data indicates how much the planet wobbles on its axis, providing more insight into its internal structure.

The "mole" heat probe was turned off earlier this year because it never got very far underground, blocked by Martian soil that proved very tough to dig through. On the other hand, the seismometers have proved extremely useful, recording and describing hundreds of marsquakes to date.

The InSight team has been able to map out the Martian core in detail because of these temblors' analysis. The lander's findings, for example, have shown that Mars has an unexpectedly big core and a thin crust. The recently discovered marsquakes may be able to clarify this discovery. 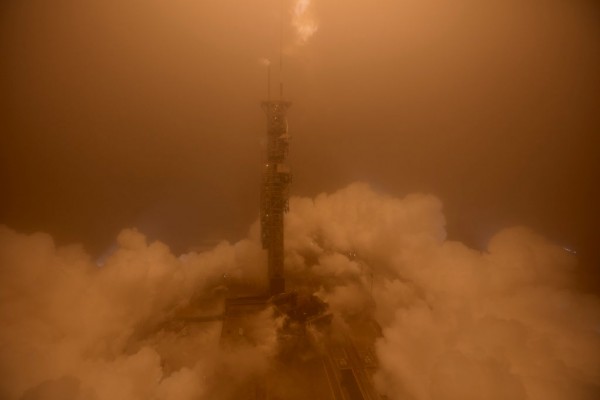 (Photo : Bill Ingalls/NASA via Getty Images)
LOMPOC, CA - MAY 05: The NASA InSight spacecraft launches onboard a United Launch Alliance Atlas-V rocket, Saturday, May 5, 2018, from Vandenberg Air Force Base in California. InSight, short for Interior Exploration using Seismic Investigations, Geodesy and Heat Transport, is a Mars lander designed to study the "inner space" of Mars: its crust, mantle, and core.

Although the InSight team is investigating the September 18 quake, mission experts have already classified the August 25 occurrences. They discovered, for example, that the 4.2-magnitude earthquake struck roughly 8,500 kilometers (5,280 miles) from InSight.

NASA officials said it's the furthest tremor the lander has ever detected. And it's a long distance from Cerberus Fossae, a location about 1,000 miles (1,600 kilometers) from the lander where lava may have flowed just a few million years ago, which has generated virtually all of the strong quakes observed so far by InSight.

The epicenter of the 4.2-magnitude quake on August 25 is yet unknown.

The 4.1-magnitude quake on August 25 was significantly closer to the lander, at around 925 kilometers (575 miles). It also had rapid, high-frequency vibrations instead of the 4.2 event's lower frequencies, NASA officials stated.

InSight principal scientist Bruce Banerdt of NASA's Jet Propulsion Laboratory in Southern California said that Mars is giving exoerts something new with these two quakes, which have unique features.

To make the recently revealed detections, InSight and its handlers overcome significant difficulty. Since touchdown, a lot of dust has collected on the lander's solar panels, drastically limiting its power production. Mars' orbital path, which has recently taken it farther and farther away from the sun, has exacerbated the situation. (On July 12, the Red Planet achieved aphelion, its farthest point from our star.)

As a result, the mission crew briefly switched down many sensors to save energy - which InSight's heaters required more of to cope with the dropping temperatures - and cleaned some of the dust. They achieved this by directing sand onto InSight's solar panels using the lander's robotic arm. These particles took dust with them as they were blown away by the Martian wind.

According to team members, these efforts allowed InSight to sustain roughly constant power levels during aphelion.