Albert Einstein proposed in 1912 that light from a distant galaxy might distort due to the gravitational pull of an object between the source and observer. To recap, Einstein claimed that a natural space-made magnifying glass might allow skywatchers to view very distant galaxies.

Hubble's glamour shots of the universe aren't just proper eye-candy; they also nearly always have a discovery behind them. 🍭👀

In this case, a discovery followed the release of an observation of an optical phenomenon dubbed an "Einstein ring."

The light inside the video embedded below was amplified by 20 times, according to NASA. Hubble's observation capacity was increased to a 48-meter (157-foot) aperture telescope. The light curved outward, highlighting one galaxy in the distance.

To highlight, the galaxy inside the circle is significantly further away from Earth than the outside ring. The circular galaxy is noticeably brighter than the galaxy within the circle. Gravitational lensing, which warps space and amplifies stars, was responsible for this once again. 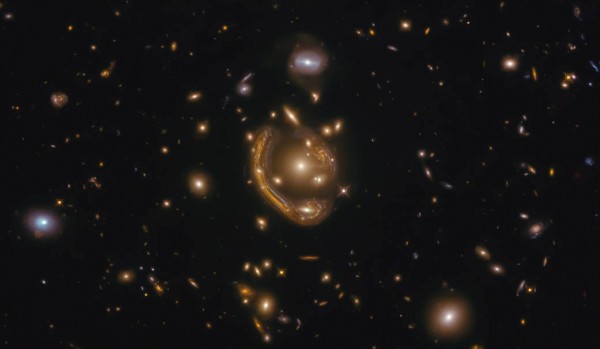 (Photo : ESA/Hubble & NASA, S. Jha; Acknowledgment: L. Shatz)
This image, taken with the NASA/ESA Hubble Space Telescope, depicts GAL-CLUS-022058s, located in the southern hemisphere constellation of Fornax (the Furnace). GAL-CLUS-022058s is the largest and one of the most complete Einstein rings ever discovered in our universe.

Anastasio Daz-Sánchez, a principal scientist from the Universidad Politécnica de Cartagena, explained in a Phys.org report that Hubble helped the experts identify the four replicated pictures and the star clusters of the lensed galaxy.

When you zoom in on the shot, you can see the true galaxy at the very bottom. Due to gravitational lensing, this galaxy was later refracted and "stretched."

In the next years, scientists expect to learn more about Einstein rings. Einstein's theory of general relativity, according to the researchers, should help with current readings on large elliptical galaxies. Scientists should be able to improve their interpretation of space distance as a result of this research.

It's worth mentioning that this ongoing study is ascribed to NASA and ESA's worldwide project collaboration (European Space Agency). In the foreseeable future, space organizations aim to delve even further into the celestial phenomena.

Hubble discovered the magnificent and extremely uncommon occurrence of Einstein rings on GAL-CLUS-022058s in December 2020, NASA said. This space object is found in the constellation Fornax's southern hemisphere (the Furnace). The Molten Ring was given to GAL-CLUS-022058 because it possesses one of the most complete Einstein rings.

The Molten Ring features one very long golden tail on its left, as shown in the tweeted image on top of this page. At the center of this circle, a brilliant body of light retains its round round brilliance. More fascinating information about the Molten Ring has just been discovered due to ongoing investigation on the space object.