Recycling old fishing line and soft baits into new products is labor-intensive, inefficient and simply, for many anglers, not easy to do. This hampers the ability to grow the volume of line and soft bait recycling in the U.S. However, three BoatUS Foundation and Berkley Recast and Recycle Contest winners aim to change that. The prizewinners - a recent college grad, an outsdoorsman and 3D printing hobbyist, and a team of four college friends also took home a total of $30,000 in prize money donated by the 501(c)(3) nonprofit and the fishing products manufacturer.

"Today's fishing line and soft bait recycling remains labor-intensive and costly," said BoatUS Foundation Director of Outreach Alanna Keating. "Working with Berkley, our Recast and Recycle Contest sought out new and innovative ideas to improve the recycling process, increase the amount of recycled material, or offer a technology breakthrough in the way line is recycled and reused. We believe these winning entries, which range from a concept to prototype, have the ability to give nearly every angler the opportunity to easily recycle." 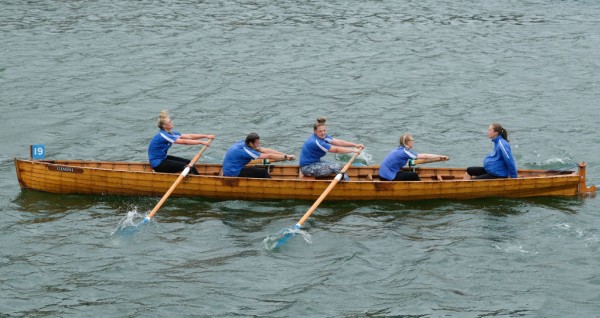 Before she began designing her winning concept, recent Savannah College of Art and Design graduate Abigail Askew designed her own survey to query anglers on what prevented them from recycling line and baits. She then addressed those concerns with her contest concept, which doubled as her school's senior year capstone project. "Anglers want to do what's best for the environment, but I found they don't always know how to or have a way to recycle," said Askew, who also competed on her school's bass fishing team. Recycling accessibility became her contest entry's primary goal, and her idea netted her a $15,000 prize.

Askew's theoretical design repurposes an idea from old: colorful, eye-catching 1960s-style plastic souvenir machines. The "Berkley Recycling Machine" brings line and bait recycling out into the open, instead of throwing discarded line into a beat-up cardboard box under the counter at your local retailer. The injection-molding machine also has appeal for kids, who, while watching discarded soft baits get a second life, also learn the importance of keeping our waters clean. The young designer, who earned her B.F.A. in Industrial Design, offers that machines could be located in retailers and at launch sites, becoming a popular novelty.

Reeling in $10,000 in prize money, Eric Vaughn's prototype "Integrated Line De-Spooler" has the potential to make recycling safer and more efficient, and better answers the question of what to do with old fishing line when respooling with new line. An active angler and bow hunter, Vaughn says it was his 3D printing hobby that brought the entry to life. Vaughn's innovative engineering solution inserts a new, smaller spool, used to take up old line that has had hooks removed, into a standard line spool, essentially "nesting" the spools in the existing empty space found inside spools sold at retailers today.

This allows anglers to quickly and efficiently manage the despool/respool process. Once the old line is removed and stored on the small spool by way of a special chuck (included) and electric drill, it's snapped neatly back into the standard size spool where the new line awaits easy spooling to your reel - functioning the same as it does normally.

A team of Product Design Innovation students from Western Michigan University, Laura Nicholas, Anna Hurst, Maxwell Downey, and Ross Malackowski, took third place and $5,000 in prize money with their "Hook Bait" app that encourages the use of sustainable alternatives. By scanning a QR code at recycling centers, the app records what you recycle and gives rewards - eco-friendly fishing supplies based on the individual fishing style - for reaching milestones. These incentives could include hip waders or water shoes made from the recycled fishing materials.

Locking in the old line on the small spool also makes it easier to recycle and reduces the chances of snagging wildlife. This recycling solution can also be incorporated into existing packaging and turned into pellets to create new spools, offering benefits to manufacturers.

The app also offers the ability to track your recycling progress, includes a map to see what friends are catching, offers a journal to save photos of fish caught and important fishing information such as lures and location, and makes it easy to post on social media.

The BoatUS Foundation and Berkley hope to raise awareness of these prizewinning concepts to help support further research and development. A video of the winning entries and more can be found at the Recast and Recycle website, BoatUS.org/Contest.

RELATED ARTICLE: Nobel Prize in Physics: Meet the three winners who changed the way we think about the universe