Two dozen countries have joined the United States and European Union-led effort to reduce methane ahead of the 26th Conference of the Parties (COP26) of the United Nations Framework Convention on Climate Change (UNFCCC) in Glasgow emissions by 30% by 2030 from its 2020 levels.

This action gives stakeholders the emerging global partnership momentum ahead of the program's launch at the United Nations summit later this month. 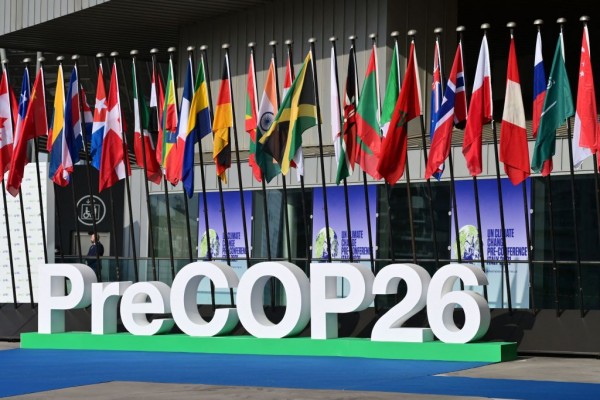 (Photo : Getty Images)
A general view shows the Milan Conference Centre, MiCO, set fot the Pre-COP 26 summit on September 30, 2021. - Each Conference of the Parties of the UN Framework Convention on Climate Change is preceded by a preparatory meeting held about a month before, called Pre-COP. Italy's Pre-COP brings together through September 30 - October 2 climate and energy ministers from a selected group of countries to discuss topics that will be addressed at COP26. (Photo by MIGUEL MEDINA / AFP) (Photo by MIGUEL MEDINA/AFP via Getty Images)

Phys.org reported that Canada, one of the major contributors to climate change, announced on Monday that it will take tough actions against methane as COP26 nears later this month.

Around 24 nations have pledged action against methane during a virtual meeting led by the US and EU who launched a joint initiative against global methane reductions.

Canada aims to reduce methane from its oil and gas sector by at least 75% by 2030 from its 2012 levels, making it the first country to support the International Energy Agency's goal.

Environment Minister Jonathan Wilkinson said that the 75% target is an important goal and that they also encourage other oil- and gas-producing nations to adopt similar actions. He added that the methane effort is part of the country's overall goal of reducing greenhouse gas emissions by 40% to 45% by 2030 from its 2005 levels, which was Prime Minister Justin Trudeau's less ambitious target than much of the developed countries.

According to Reuters, the nine original partners of the pledge include Britain, Indonesia, and Mexico who all signed last month. As of now, the new signatories include Canada, Central African Republic, Congo-Brazzaville, Costa Rica, Cote d'Ivoire, the Democratic Republic of Congo, Micronesia, France, Germany, Guatemala, Guinea, Israel, Japan, Jordan, and Kyrgyzstan.

They are also joined by countries Liberia, Malta, Morocco, Nigeria, Pakistan, the Philippines, Rwanda, Sweden, and Togo as confirmed by the US and EU.

Why Countries are Focusing on Methane

Methane is a greenhouse gas and the second biggest cause of climate change after carbon dioxide. According to the US Environmental Protection Agency, carbon dioxide makes up 80% of greenhouse gases in the atmosphere followed by 10% of methane, then 7% nitrous oxide, and 3% fluorinated gases.

Production and transport of coal, natural gas, and oil emit methane, but it can also come from livestock and other agricultural practices. For example, land use and decay of organic waste in solid waste landfills produce methane emissions.

That is why governments have seen a significant cause to slash global methane emissions to limit global warming to the goal of the Paris climate agreement, which is 1.5 degrees Celsius. John Kerry, the US special climate change envoy, said that he hoped more than 100 countries would sign the pledge in time for COP26 that will happen this Oct. 31 to Nov. 12, 2021 in Glasgow.