Two US Deer Deadly Diseases Reported In Minnesota And Vermont

Health officials recently reported the occurrence of two serious illnesses with one described as deadly that affect deers in the United States.

A Gizmodo report said, specifically, a universally "fatal prion disease" was detected recently in Wisconsin, while a hemorrhagic illness is infecting deer somewhere else.

This is considered a perilous time at present for deer in the US. Yesterday, officials in Minnesota passed an emergency order to halt the local travel and importation of farmed deer to slow down the transmission of universally deadly prion disease among wild deer.

In Vermont, wildlife officials announced the first identified case of another fatal disease in deer within the state, one that's causing massive internal bleeding.

ALSO READ: Deer From Tennessee Has Hairy Eyeballs Due to Bizarre Condition, Can Humans Get Dermoids Too? 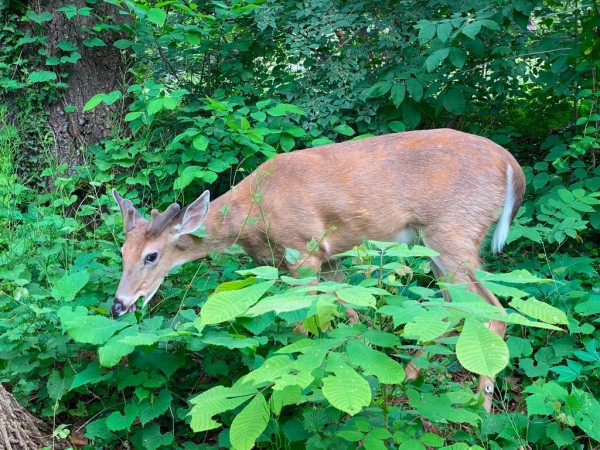 (Photo : DANIEL SLIM/AFP via Getty Images)
A white-tailed deer is seen eating leaves in front of a home in Bethesda, Maryland

What is Prion Diseases?

Prion diseases are caused by harmless proteins that have become misfolded and turned into hazardous form. When a misfolded prion comes into contact with its normal counterpart, the latter goes rogue as well, resulting in a build-up of harmful prions that eventually kill the body, particularly the brain.

Some prion diseases are communicable by exposure to infected tissue which includes the brains' cannibalism. Others, on the other hand, may run into families. More so, some just occur spontaneously without any clear reasons.

All known prion diseases, both in humans and animals, are 100 percent deadly that it can take years, even decades for indications to appear after exposure.

Chronic wasting disease (CWD) as explained by the Centers for Disease Control and Prevention is a type of prion disorder that can impact a wide range of moose, deer, and elk. Its most prominent symptom is extreme weight loss, although others include drooling, confusion, absence of coordination, and the loss of fear in the presence of humans.

In general, CWD is rare among wild and farmed deer although a lot of wildlife experts are afraid that the illness is an urgent threat that's turning worse.

The disease can transmit fast among crowded populations once established, and its existence can remain in the soil for a long time. More so, the water where infected deer are urinating, defecating if prions were not scary enough, they are much difficult to kill as well, compared to other contagious germs.

At present, occurrences of CWD have been reported in 26 cases and in Canada, as well as in other parts of Asia and Europe.

An AP News specified that it is this danger that forced officials at the Minnesota Department of Natural Issue to release their emergency order, which will provisionally stop the transportation and importation of farmed whitetail deer in and out of Minnesota.

Such a decision was prompted by the new report of the CWD outbreak at a Wisconsin deer farm that sold deer in this year's summer to seven states which include Minnesota.

According to Sarah Stromme, the Minnesota Department of Natural Resources Commissioner, this illness postures a clear, immediate, and serious danger to the wild deer of Minnesota, and such actions are reflecting at what's at state.

On the same day, the Department of Fish and Wildlife in Vermont released its own deer-related warming, following the discovery of the first EHD or epizootic hemorrhagic disease among wild deer in at least the state's two regions.

Not contagious between deer, EHD is caused by a virus that's transferred through midge flies' bites. Athough it is not as fatal as CWD, it can result in severe, at times deadly bleeding and disability.

Check out more news and information on Deer on Science Times.