An international team has recorded the most extensive collection of FRB events ever observed in history using the world's largest single-dish radio telescope, the Five-Hundred-Meter Aperture Spherical Radio Telescope (FAST), with a total of 1,652 outbursts.

FRBs, or fast radio bursts, are one of our universe's biggest mysteries. These eruptions from outer space may flare and fade in a matter of milliseconds, releasing as much energy as the sun releases in a year in each occurrence. They occur in the sky many times a day, but most seem to be one-time phenomena, making them difficult to capture. Since their discovery in 2007, FRBs have piqued the interest of scientists who want to learn more about their mysterious origins and utilize them as unique instruments for exploring the depths of intergalactic space. 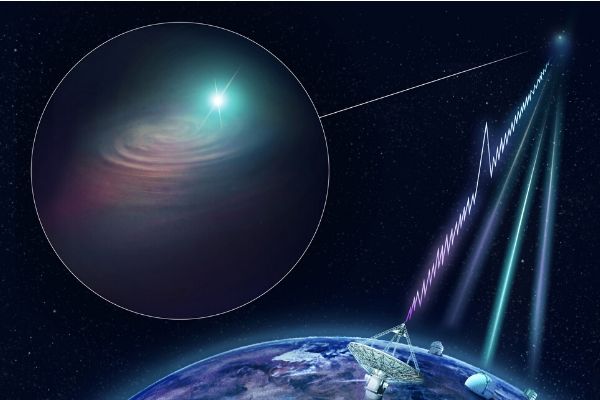 (Photo : d.newsweek.com)
ETs might be out there as fast radio burst was sent by a nearby galaxy.

The observations significantly increased the overall number of known FRB events. They showed a wide variety of brightnesses within the recorded occurrences, providing fresh insights into the astrophysical nature of their enigmatic source.

ALSO READ: Mysterious Signal Flashing From Galaxy's Core Baffle Scientists; Where Is There Source of This Radio Waves?

Observers didn't see the first repeating source, known as FRB 121102, until 2016. According to statistics derived from the ever-growing database of detections, approximately 20% of FRBs occur several times, allowing astronomers to conduct more comprehensive follow-up studies. So far, FRB 121102 has been the most thoroughly investigated of these sources. Scientists using other radio telescopes have recorded over 350 FRBs from this source, which is situated in a galaxy where many newborn stars are forming, prior to FAST's mother lode of new events. "Other telescopes typically receive between two and a hundred pulses from a recurring source." "FAST did over a thousand, which is incredible," Petroff adds.

According to Di Li, the paper's main author and FAST's principal scientist, FAST's exceptional sensitivity allows it to detect less intense pulses that other telescopes cannot. During the commissioning phase of the telescope, the crew observed that FRB 121102 was a whirlwind of activity, producing bright pulses regularly. As a result, they decided to monitor it for approximately an hour each day. The bursts proved to be much more intense than anticipated. There was approximately one in every 30 seconds on certain instances.

There were two kinds of bursts: those with high brightness and those with low brightness. Study co-author Duncan Lorimer of West Virginia University, who co-discovered the first FRB in 2007, told Scientific American that the discovery might indicate two different physical processes that cause the bursts.

However, the nature of such processes remains unknown. Despite this, Li believes that he and his collaborators have severely constrained the possibility that FRB 121102 comes from an isolated compact object such as a rotating neutron star or a black hole. That's because the ensemble of pulses had such high energies and no short-term periodicity (which would suggest a source that spins or orbits at a set pace).

Though scientists propose strange life as a possible explanation, Daily Mail said it is more probable that FRBs are caused by something natural, such as a spinning neutron star, black hole, or even Big Bang remnants.

Although FRB 121102 has a 157-day cycle, previous astronomers have labeled it as 'seasonal.' Only a tiny percentage of FRBs occur more than once, and most of them have unexpected appearances.

RELATED ARTICLE: 'Mysterious' Radio Signals Near Galactic Center Detected By Scientists; What Is It Trying To Say?