A bright streak across the sky of west Michigan was seen around 12:45 am on Wednesday, October 20. Wood TV reported that astronomer Jonathan McDowell from the Smithsonian Astrophysical Observatory confirmed that the bolide was what was left of a failed Russian satellite instead of a meteoroid that is re-entering the Earth.

In recent years, spectacular shows of space junk falling back to Earth has become more common. Such incidents are expected to increase in number as humanity launches more and more satellites in orbit. 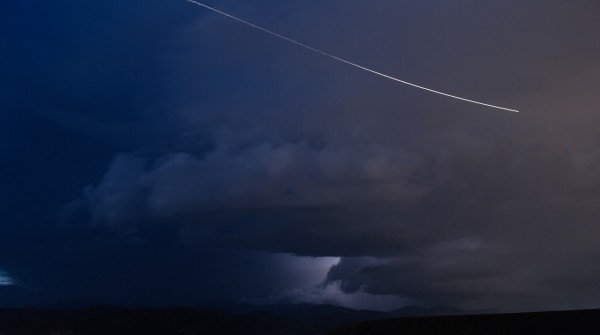 Failed Russian Satellite Falls Back to Earth as Fireball

The American Meteor Society has been collecting reports of fireballs, including the most recent one of the falling failed Russian satellite. But they confirmed on Wednesday morning that the object was not a bolide or an extremely bright meteoroid.

At 5 am on the same day, the group has already received 80 reports of the fireball in which many has described a persistent, glowing train tailing the fireball itself.

Moreover, other states have also reported sightings of the fireball. Residents from Michigan and in Ohio, Indiana, Illinois, and as far away as West Virginia and Tennessee also saw the failed Russian satellite re-enter Earth's atmosphere.

In his tweet on Monday, McDowell said that the Russian reconnaissance satellite known as Kosmos-2551 was launched on September 9, 2021, but failed shortly when it had not adjusted its orbit since liftoff. He noted that the satellite was expected to re-enter Earth on Tuesday, which turned out to be off by less than one hour.

Fortunately, the incineration of Kosmos-2551 did not threaten anyone on the ground. As McDowell predicted, there is no debris that hit the ground because the satellite only weighs about 1,100 pounds (500 kilograms).

Space junk fireballs are spectacular to see, but they have become quite common in recent years. According to Space.com, the re-entering stage three of a Soyuz rocket also caused a brilliant sky show over the skies of Australia.

Also, CBC reported that fireballs streaking across the sky in March set off an epic hunt for space junk, which re-entered Earth that almost hit a trailer home with an older couple inside in Washington state. The space junk is the remains of a SpaceX Falcon 9 rocket that hit the Earth on March 25 and created a light show captured on video.

Although most of the remains of the rocket disintegrated upon its re-entry into Earth's atmosphere, some of it survived and smashed into Earth's surface.

As Space.com reported, incidents like these are expected to become more and more common as humanity launches an increasing number of satellites to orbit. However, the booming industry of satellites is also causing some concerns to many experts who emphasized that action is needed to control space junk and prevent it from getting out of hand.

Check out more news and information on Space Junk in Science Times.