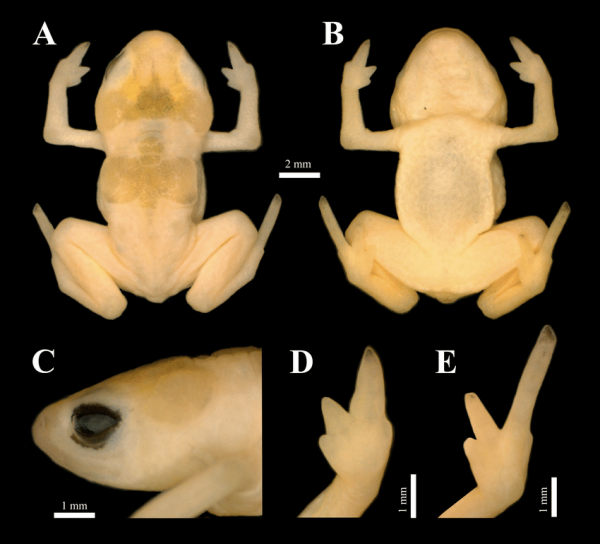 An aquatic fungus had recently threatened to wipe off terrestrial frogs as it has done to the extinction of some species of amphibians.

Phys.org reported that in Brazil, researchers backed by FAPESP identified unprecedented death among a species of small frogs also called "pumpkin toadlets" found in the Atlantic Rainforest from any marine environment.

The said animals were severely infected by chytrid fungus also known as Batrachochytrium dendrobatidis, as described in Trends in Parasitology, which is causing chytridiomycosis.

The research presents that the fungus also threatens the terrestrial-breading amphibians with essential environmental functions, including controlling insects that spread illnesses like yellow fever, zika, and dengue.

According to the study's first author Diego Moura-Campos, the fungus is attacking the skin of amphibians, which is where it's exchanging gas with the external environment. Infection, he explained, is causing a physiological imbalance, and the animal dies eventually from a heart attack.

The research was carried out while Moura-Campos was doing his master's research at the University of Campina's Institute of Biology or IB-UNICAMP in the Sao Pao, with a Brazilian Ministry of education's Coordination for the Improvement of Higher Education Personal scholarship.

Professor Luis Felipe Toledo, from IB-UNICAMP, who's also co-author of the study published in Biological Conversation said, they have studied the fungus from various angles. However, they have rarely had the unfortunate opportunity to view animals that die from fungal infection in the wild. He also said this is a pioneering study to exhibit the phenomenon in Brazil.

If an amphibian gets infected and eventually dies, it doesn't mean the fungus is the reason for its death. Possibly, it's coexisting with the pathogen without the disease being developed.

In this circumstance, the researchers were certain it was the reason for the death of the animals as they experienced the right symptoms like weight loss, intensely sloughing skin, and extremely high load infections explained Toledo, who's the principal investigator, as well, for another job that concentrates in understanding the manner the fungus is spreading in nature.

The study authors said they believe direct-developing species, reproducing on land and don't have a tadpole, with terrestrial eggs that hatch as completely formed miniature adults are even less adjusted to the fungus.

Aquatic species have been in contact with the pathogen for longer periods and may have developed a level of resistance to infection.

Based on the observation of Moura-Campos, morbidity and mortality in infected frogs during a field investigation carried out on the Serra do Japi Biological Reserve in Jundiai, Sao Paulo, from May 2018 to May 2019.

Inquisitively, dead and dying individuals of such species Brachycephalus rotenbergae, as described in Sci-News.com were discovered following an unusual period of drought.

Guilherme Becker, a University of Alabama professor in the United States, said such animals are quite tiny and difficult to search. After they died, they decompose fast.

Discovering nine of them dead or severely ill in a short span of time, Becker added, "As we did, proposes others perhaps, died, too."

The fungus first came from Asia and has potentially spread globally due to the trade-in frog meat. Species eaten by humans for this purpose, like the American bullfrog or Rana catesbeiana, are resistant to the fungus and can be bearers minus infection.

A paper that came out in the Science journal in 2018, with Toledo as one of the co-authors, the fungus originally came from the Korean peninsula. It spread to other areas of the world during the 20th century.

According to Becker, amphibians are essential to ecosystems. He added, their biomass in forests is huge.

They function as food for a great range of other animals, consume arthropods in the wild, and regulate communities of invertebrates.

In this space of aquatic animals, most are herbivorous in the tadpole phase and eat phytoplankton, which could overcome environments if not for the young frogs.