Teleport Anywhere in the World: New Holography Technology Lets People Appear in Full-Size, Lifelike 3D Form When Interacting with Others

Two venture-supported firms have recently impressed viewers with new technologies similar to the holography technique featuring the iconic Princess Leia hologram scene in the original 1978 Star Wars movies that sharpened the tech experts' appetite for such a futuristic kind of communication.

In both circumstances, an individual in a studio, the presenter, can appear in full-size, lifelike 3D form and interact with others anywhere in the world where one or more booths are connected to the networks of the said companies through the internet.

In this said report, tech news site's John Boyd wrote that he got to see an actual life demonstration of the PORTL technology this month when Marina Haba in LA, a tech investor in PORTL, was beamed into a booth set up in an apartment in Tokyo to communicate with her son there. 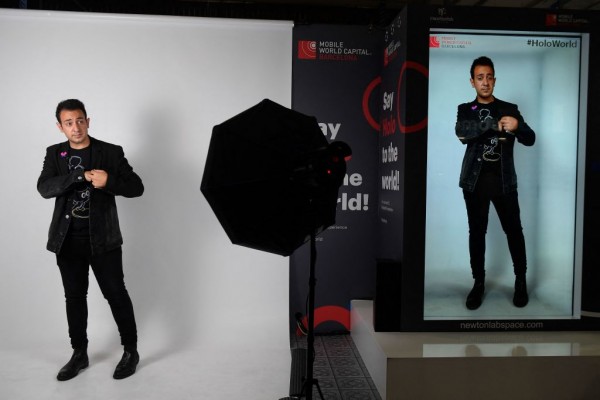 (Photo : JOSEP LAGO/AFP via Getty Images)
A man poses poses next to his hologram at the Holo World stand during the Mobile World Congress (MWC) fair in Barcelona on June 29, 2021.

Haba, along with others who participated in the presentation appeared very real. Meaning, it was as if the tech investor was standing in the booth as she conversed with her son.

Describing the demo, Boyd said the sound was low though, for them as onlookers and latency sometimes interrupted the supposedly "smooth communication." In general, the presentation was remarkable and impressive.

PORTL founder and CEO David Nussbaum said the latency was presently sub-1 second, and the goal was to decrease it to below 100 milliseconds.

A standard internet connection and electric outlet are all that is needed for a plug and play to work, as well as, signing on to the could-based network of PORTL that's using Amazon Web Services.

How the System Works

A two-way audio speaker-mic system is fixed into the bezels of the booth on either side, while two cameras are installed at the top.

One camera captures the person directly in the front of the cabinet so that the presenter can see him in the studio. The other, Boyd described in the article, "gives an in-depth view of the surroundings.

On the side of the presenter, a simple studio that comes as a kit from PORTL is needed. This kit is equipped with a tripod-mounted softbox to provide LED illumination, a return-feed monitor that displays the person in interaction with the presenter, a 4K camera on a tripod, and either a lavalier mic or a boom.

The HoloPod cabinet of AHRT is outfitted with cameras and two-way communications. In terms of technology, a video feed is projected on a mesh of woven material that's painted with exclusive reflective paint, and an image is reflected back to the viewers.

By carefully adjusting the lighting on both sides of the speaker, the eyes of the audience combine the information while the brain develops the volumetric effect.

ARHT has established well-known presenter studios in Los Angeles, New York, Toronto, London, and China. It also has hook-ups with partners in other countries.