Several private companies think they can market fusion energy within a decade, providing a carbon-free power source with near-infinite fuel, maybe in time to mitigate climate change's escalating hazards. However, a former CIA analyst believes that the marathon race for fusion power is strong for both China and the US. Meanwhile, another expert said Europe is falling behind the game. 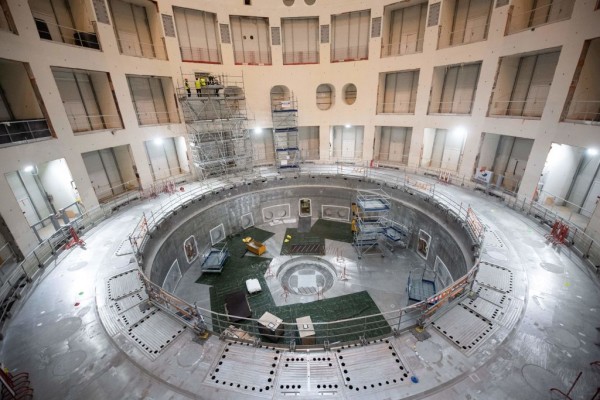 (Photo : CLEMENT MAHOUDEAU/AFP via Getty Images)
Technicians work on the bioshield inside the Tokamak Building with the base of the cryostat at its base during the launch of the assembly stage of nuclear fusion machine "Tokamak" of the International Thermonuclear Experimental Reactor (ITER) in Saint-Paul-les-Durance, southeastern France, on July 28, 2020. - Thirty-five nations are collaborating in the ITER energy project aimed at mastering energy production from hydrogen fusion, as in the heart of the sun, a potential new source of carbon-free and non-polluting energy

US, China On A Race For Nuclear Fusion, Other Energy?

Tim Chrisman, a former CIA space analyst, told the Jerusalem Post that China is pushing ahead with possible revolutions in producing energy from space and mining space resources. The US might be left behind in the race, he added.

According to Christman, China has an immediate advantage since its military, and economic components are almost interwoven. He emphasized, however, that gathering and integrating multiple parts of national power to accomplish a single demanding long-term purpose is a larger task for America.

The former CIA analyst said outer space has nearly endless amounts of energy and raw materials. These items include Helium-3 fuel for clean fusion reactors on the Moon to heavy metals and volatile gases from asteroids. These materials, he claimed, might be gathered for use both on Earth and in space. Christman added that China would almost definitely exploit whatever resources it can get to harm opponents, competitors, and innocent bystanders.

Christman believes that getting there first is more akin to launching the first satellite than the Russian and US space battles. He pointed out that a lot relies on how it can be utilized on the back end, such as whether it can be used for power and energy quickly or reliably transported down to Earth en masse. The race throws up the possibility of significant changes, he remarked.

Europe accounts for less than one in ten of the world's private nuclear fusion enterprises, putting the continent behind the United States.

They're experimenting with new ways to harness nuclear fusion that might one day replace the arduous 36-year-old ITER mega-project in southern France, which has been plagued by delays and cost overruns.

The organization questioned its members, and 13 of those who answered are based in the United States. There are just three in the EU: Renaissance Fusion in Grenoble, Marvel Fusion in Munich, and one other German fusion company established after the survey.

According to Holland, the EU's aim of publicly subsidizing the ITER fusion experiment and then "somehow" turning it into a commercial product is "dirigiste."

BBC's Science Focus said nuclear power plants now generate energy by splitting atoms, a process called nuclear fission. Nuclear fusion, on the other hand, is the process of fusing atomic nuclei to generate energy. It's the same reaction that's going on in the center of the Sun.

Nuclear fusion, per Gizmodo, is a very energy-dense process that does not occur naturally on Earth. We would no longer be reliant on carbon-based energy sources like coal, oil, and natural gas if humanity could safely and cheaply create more energy from fusion reactions than it takes to power the processes (which requires a lot of energy).

When the light nuclei of two atoms merge to form a single nucleus, nuclear fusion is called nuclear fusion. An enormous quantity of energy is released during this process. For fusion to occur, things must be highly energetic, which implies they must be boiling hot, at least 100 million degrees. The Sun shines due to nuclear fusion, which occurs when hydrogen atoms fuse to produce helium, releasing energy in the process.

If scientists could make that process happen on Earth, making it work globally would make energy far cleaner by eliminating the need for fossil fuels.

RELATED ARTICLE: Renewable Energy and Its Role To a Clean Energy Future