COVID-19: 'Forgotten' Amazon Tribes in Peru Learns About Coronavirus For The First Time

Is it possible that some individuals around the globe are still uninformed of the pandemic? Yes. COVID-19 has left an area in Peru unspoiled, not only in mind. Last month, a remote "forgotten" ethnic community in Peru's Amazon forest heard the phrase "coronavirus."

These indigenous inhabitants of the Mangual hamlet, located in the Loreto area of northern Peru, still do not have access to power or the internet. They live in wooden stilt houses and rely on their hunting and fishing abilities.

According to official mortality figures, all of the members are Urarina, an indigenous ethnic tribe with just 5,800 individuals living on the planet. A community leader in a remote Peruvian town was informed how Covid had decimated most of the world more than a year and a half after the worldwide pandemic began. However, the pandemic affected some individuals residing in areas other than Mangual village, with five people dying due to COVID-19. 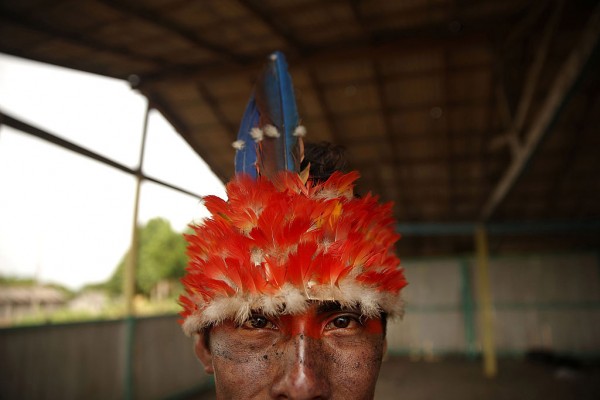 (Photo : Mario Tama/Getty Images)
SAO LUIZ DO TAPAJOS, BRAZIL - NOVEMBER 27: A member of the Munduruku indigenous tribe wears a traditional head dress near the Tapajos River in preparation for a "Caravan of Resistance'" protest by indigenous groups and supporters who oppose plans to construct a hydroelectric dam on the Tapajos River in the Amazon rainforest on November 27, 2014 in Sao Luiz do Tapajos, Para State, Brazil. Indigenous groups and activists travelled by boat from communities along the river to express resistance to the proposed 8.040- MW Sao Luiz do Tapajos mega-dam, which is one of a series of five dams planned in the region that will flood indigenous lands and national parks. The United Nations climate conference is scheduled to begin December 1 in neighboring Peru.

According to a Reuters report, Mariano Quisto, the chief of a tribal group in Peru's deep Amazon jungle, learned about the pandemic only when health experts arrived to vaccinate the locals in October 2021.

He told Reuters that he had no idea what COVID-19 meant and that this was the first time he had heard of the virus that was sweeping the globe.

After a three-day boat voyage via rivers that began in the Amazonian city of Iquitos, the world's largest metropolis inaccessible by road, Reuters landed at Quito's Urarina indigenous settlement alongside government health officials and International Red Cross members.

Julio Mendigure, the country's health ministry's head of health strategy for the tribes, said Indigenous communities - particularly in the Amazon - have among of Peru's lowest immunization rates. He claims that just about 20 percent of them have been fully vaccinated, compared to about half of the country.

ALSO READ: Nipah Virus Outbreak Eyed as Trigger of the Next Pandemic; Is Our Healthcare Sector Ready to Face Another Zoonotic Disease?

Shortage of Health Professionals An Issue In Rural Areas

Warren Record said that rural communities have issues not seen in metropolitan regions regarding the ongoing COVID-19 pandemic. According to Warren County Commission Chairman Davis, there are disparities in healthcare availability between urban and rural communities.

Minorities in rural regions, according to Clayton, are the most averse to getting the vaccination. Rural folks with no health insurance are the least likely to obtain the vaccination, she noted.

COVID-19, experts claim, has worsened difficulties that rural communities already suffer. These include loneliness, particularly among the elderly, and a lack of broadband internet connection in many regions.

Warren County Health Director Brake added that community education and outreach have been critical, particularly in delivering information about the COVID-19 vaccination.

For the Amazon tribes' case, Quisto said headaches, diarrhea, malaria, and conjunctivitis are common problems in the town without physicians. He is also worried about taking care of their patients due to the shortage of health professionals in their area.

The native language, which evolved through hundreds of years of isolation from the rest of Peru, is substantially distinct from the Spanish spoken throughout the rest of the country. According to a story in the Daily Star, campaigner Gilberto Inuma stated that brigades haven't visited the area in many years. He went on to say that these areas are truly neglected.