3 Dead, 500 Stung as Heavy Storms in Egypt Wash Scorpions Into Homes; How to Get Away With Scorpion Sting?

Three people died, and hundreds of others injured Egypt after bad weather awakened swarms of poisonous scorpions from their hiding places and into the streets and houses.

Last week, scorpions and snakes were driven out of the southern city of Aswan by torrential rain, dust storms, and snow, according to Al-Ahram, a government-run Egyptian media. BBC News said three individuals have died due to scorpion stings, and 450 more have been hurt due to the stings.

According to Al-Ahram, those harmed are being treated with anti-venom at hospitals and medical institutes in more outlying places. Health officials said doctors who were on holiday had been summoned to help treat the surge of patients. 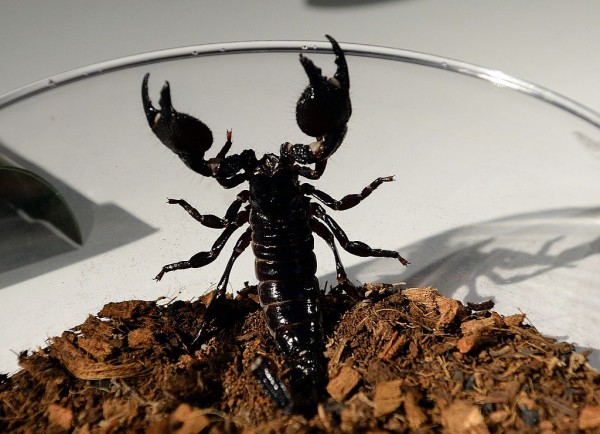 (Photo: DON EMMERT/AFP via Getty Images)
An Emperor scorpion wants out of a bowl during a media preview for "Spiders Alive" July 1, 2014, at the American Museum of Natural History in New York. The museum has the largest collection of research spiders.

Residents are being encouraged to remain inside their houses in the meanwhile. Reports said Aswan Governor Ashraf Attia also restricted traffic, blocking local roadways to minimize accidents caused by reduced mobility in the rain.

The Al-Ahram newspaper reported the fatalities, citing Ehab Hanafy, the Health Ministry's Undersecretary in Aswan. It didn't go into detail about the cause.

#Egypt : Health official in Aswan has told BBC that the heavy thunder & hail storm there washed scorpions into the streets & people’s homes - causing 400 people to be stung - in the rains scorpions seek refuge anywhere they can… #أسوان #مِصر
pic.twitter.com/zGbWzTNMQn

Khaled Megahed, a spokesperson for the health ministry, emphasized the ministry's preparation to deal with the current storm. According to The National, Megahed affirmed that hospitals around the country were adequately stocked with anti-venom for snakes and scorpions. He advised anyone stung by a scorpion to seek care at the local hospital as soon as possible.

The stings of scorpions can be fatal. Saint Louis Zoo said the Egyptian fat-tailed scorpion, spread throughout Northern Africa, is one of the world's most dangerous scorpions. According to the Times of Israel, an Egyptian fat-tail scorpion sting may kill a human in less than an hour.

Numbness throughout the body, trouble swallowing, a thick tongue, confused vision, roaming eye movements, convulsions, salivation, and difficulty breathing are all severe indications and symptoms of a scorpion bite. These signs and symptoms are a medical emergency.

If a person has been stung by a scorpion, EMedicine Health has some home remedies:

Check out more news and information on Environment and Medicine and Health in Science Times.