Planet Earth is on its way towards becoming the Solar System's fifth planet to acquire planetary rings. Earth's rings, however, will be formed of trash and rubbish, unlike the four other planets in the solar system. Humans would entirely construct it.

The only planets having ring systems are Jupiter, Saturn, Uranus, and Neptune, which are made up of frozen rocks such as asteroids and other celestial bodies or natural debris.

The ring system proposed for Earth, on the other hand, would be substantially different. These rings, according to experts, are made up of debris from wrecked satellites and other dead rockets. 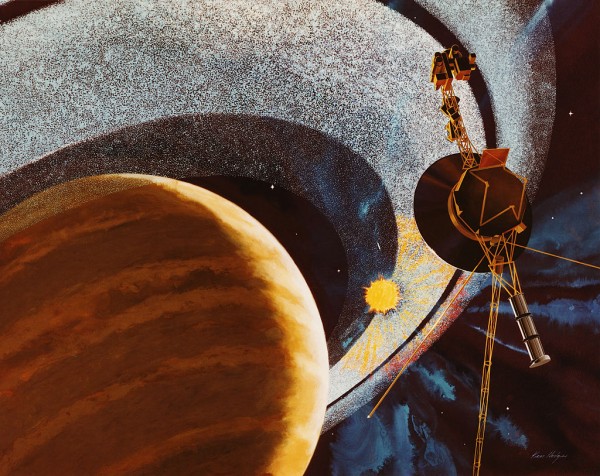 (Photo : NASA/Hulton Archive/Getty Images)
An artist's impression of NASA's Voyager 1 space probe passing behind the rings of Saturn, using cameras and radio equipment to measure how sunlight is affected as it shines between the ring particles. The image was produced in 1977, before the craft was launched, and depicts events due to take place in 1980.

Space Junk May Soon Give Earth Its Own Rings

According to the New York Post, Utah space specialists have been researching several cost-effective and safe strategies for cleaning Earth's orbit of trash.

Abbott warned that space organizations and enterprises should be cautious when performing space activities to clear up the accumulating space trash outside the Earth.

He went on to say that once this happened, magnetism would cause the new garbage to combine with the old trash, perhaps resulting in the unnatural Earth's rings.

The paper "Dexterous Magnetic Manipulation of Conductive Non-Magnetic Objects" has been published in the journal Nature.

According to Emerging Tech Brew, new agencies may be established as the space debris problem has become a serious concern outside of the globe.

These space firms are anticipated to focus on providing services that will minimize the increasing amount of garbage outside of Earth. You must keep in mind, though, that this is still just a supposition.

According to NASA's Orbital Debris Program Office, an estimated 23,000 pieces of orbital debris bigger than a softball are joined by hundreds of millions of fragments smaller than a softball. These may reach speeds of 28,160 km/h (17,500 mph), posing a severe hazard to satellites, space travel, and research.

Due to their enormous speeds, removing these space debris particles is very dangerous - and difficult to accomplish. A small portion of this debris - roughly 200 to 400 pieces - burns out in the Earth's atmosphere every year. However, as the planet's orbit is more utilised and traveled, new fragments make their way into orbit. Private companies' plans to launch tens of thousands of more satellites in the future years would further exacerbate the situation.

RELATED ARTICLE: NASA Calls Russia 'Irresponsible' for Blowing up One of Its Satellites Near International Space Station With Missile