A study led by a team of engineers from the University of Cambridge has shown that airborne transmission of SARS-CoV-2, the virus that causes COVID-19, is highly random and that the 6-feet social distancing implemented at the start of the pandemic was a number chosen from a risk continuum and not from a concrete measurement of safety.

SciTech Daily reported that the team used computer modeling to quantify droplets spread when people cough and found that social distancing alone is insufficient. People can still transmit the virus to another person at a two-meter distance, even when outdoors. 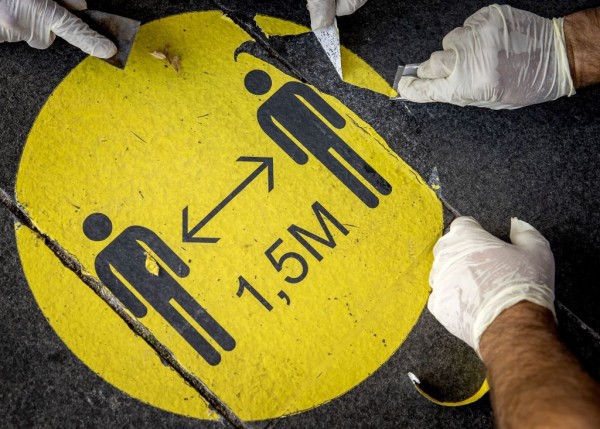 Social Distancing Not Effective Without Other Mitigation Measures

In the study, titled "Estimates of the Stochasticity of Droplet Dispersion by a Cough Featured," published in the journal Physics of Fluid, researchers highlight the importance of vaccination, ventilation, and wearing of face masks this winter season. They also wrote that social distancing is not an effective mitigation measure without other precautionary measures.

Airborne transmission of COVID-19 can infect people, especially when people cough, talk or even breathe as they expel larger droplets that settle or become smaller aerosols floating in the air.

Lead researcher Professor Epaminondas Mastorakos from Cambridge's Department of Engineering said that many people reportedly got infected via door handles early on the pandemic, which means that the virus must leave the body and land on a surface or disperse in the air through fluid mechanical processes.

Being an expert in fluid mechanics, he and his colleagues have developed various models of how COVID-19 is transmitted from one person to another. He explained that transmission of the virus could be explained through virology and fluid mechanics. The former describes how much virus the body has, while the latter explains the droplets when expelled.

Fluid specialists, such as Mastorakos assess the risk of the droplets infecting other people. Cambridge engineers have measured this using computer modeling to solve the equations for turbulent flow and create detailed descriptions of droplet motion and evaporation.

Researchers showed in their simulations that a person coughing could produce thousands of droplets that will fall on nearby surfaces or turn into smaller droplets that will suspend in the air and spread beyond two meters. More so, the distance and speed of transmission are affected by the room's ventilation quality.

Their research also supports an earlier study from the Pennsylvania State University, which found that aerosols travel farther and faster in rooms with displacement ventilation or when fresh air continuously flows from the floor and pushes old air to the exhaust near the ceiling.

Science Daily reported that this ventilation system is commonly installed in residential homes and can result in humans breathing zone concentration of viral aerosols that are seven times higher than mode ventilation systems in commercial buildings and result in better air integration.

Researchers said that results are not surprising as an airborne infection is more likely in residential than office environments. Although, strand-alone air cleaners and mechanical fans may also help.

Increasing ventilation and mixing rates can reduce airborne transmission, but ventilation and social distancing should be combined with other protective techniques, like wearing face masks and vaccination.