Trappist-1 Planets Avoid 'Bombardment' Before; Is There Really Water in Those Exoplanets?

Planetary experts said that earth-like planets discovered in the Trappist-1 star system in 2015 should be devoid of large water deposits. It raises serious doubts about their habitability.

In recent years, scientists have discovered several planets that, if not the title of "twin of the Earth," at least claim to be its closest equivalents. The first was discovered near Proxima Centauri, the closest star, and three more - in the Trappist-1 star system in the constellation of Aquarius, which is home to seven Earth-like worlds simultaneously.

This cluster of seven planets was discovered in 2015 around a tiny red dwarf about 40 light-years from the Sun. Many scientists doubted that these worlds could host life because of their near closeness to the star and the extraordinary synchronization of the orbits of the TRAPPIST-1 system's planets. 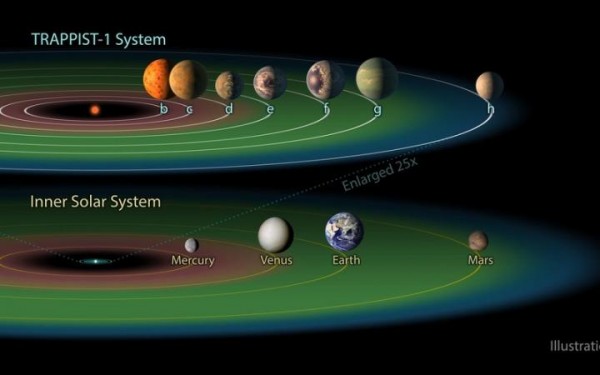 New evidence has been acquired by a group of European and American astronomers led by Sean Raymond, a researcher at the University of Bordeaux (France), indicating life on the surface of these worlds is unlikely to exist. Scientists arrived at this result by simulating the development of these planets and comparing it to the formation of the Earth.

"We have some constraints today on the composition of these planets, like how much water they can have," researchers said in a news release. "But we have very big error bars."

Researchers detailed their study titled "An Upper Limit on Late Accretion and Water Delivery in the Trappist-1 Exoplanet System," in Nature Astronomy.

After our planet completed its development, nearly all of its water and atmospheric gases stocks plummeted to Earth. Cosmos said protoplanetary bodies, comets, and asteroids were bombarded from the solar system's outskirts by moving Jupiter and other gas giants.

Something similar, as proven by Raymond and his colleagues' calculations, could scarcely happen to the planets in the TRAPPIST-1 system because the impact of a significant number of asteroids on their surface would cause their orbits to desynchronize. Scientists have assessed how much water and other volatiles may reach these planets based on this theory.

According to their estimates, the cumulative mass of all asteroids and comets that may fall on all TRAPPIST-1 planets was incredibly modest. It couldn't be more than the Moon's mass, which is tens of thousands of times smaller than the mass of celestial bodies that crashed with the solar system's worlds. At the same time, the TRAPPIST-1 system's planets developed at a rate ten times quicker than the Earth's, preventing them from capturing substantial volumes of gas from the protoplanetary disk.

Raymond and his colleagues said all of the results show that major water reserves should be lacking on all TRAPPIST-1 worlds if they developed under similar conditions to the Earth. Otherwise, they must have been in the bowels or on the surface of these planets from the very beginning of their formation, which is exceedingly implausible, according to experts.