Printed Wearable Electronics Could Be Key to Biosensors, Smart Bandages, and Electronic Tattoos

Wearable electronics have been making its way through the market for a number of years now. And as its commercialization carries on, especially in the medical field, researchers continue to look for ways to broaden its application.

In a recent publication in ACS Nano, engineers from Duke University report how they came up with a new technique of printing electronics directly onto the skin, much like an electronic tattoo. This "print-in-place" method, which the researchers claim is the first of its kind, could be used in customizing biosensors and smart bandages for medical applications.

Current techniques of producing wearable, flexible electronics make use processes applied in harsh conditions like chemical baths, hardening processes, and sterilization by high temperature. With the technique devised by the engineers from Duke, flexible electronics can now be printed onto the skin, on paper, and other flexible materials. This would enable medical practitioners to print diagnostic and therapeutic devices onto the skin of patients without using complex and bulky medical tools. 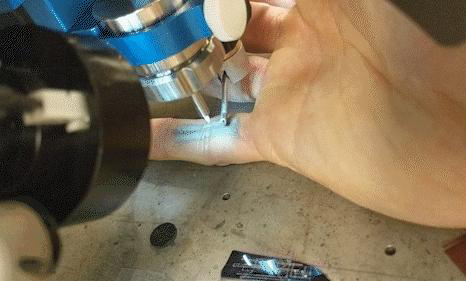 The combination of two advances in science made it possible for the team to come up with their printing technique. They used a new silver nanowire conductive ink and carbon nanotubes as the main components of the electronic system to be printed. The silver nanowire ink could be used to print at low temperatures, while the carbon nanotubes could be used to create electronic transistors onto a surface. The combination of these two does not require any harsh processes, making them ideal for the system.

In a press release, lead researcher Aaron Franklin talked about how the term "printed electronics" gives consumers the idea that the user would work like a usual printer—it would make use of a substrate, or the analogue of paper in the case of ordinary printers, print the design, and can then be later on used as a fully functioning electronic circuit.

However, this is not the case with existing electronic printers as Franklin explains. "The reality is that the process actually involves taking the sample out multiple times to bake it, wash it, or spin-coat materials onto it."

He then went on to say that their technique, different from existing ones, satisfies the idea of consumers, as it is one that makes their perceptions a reality. 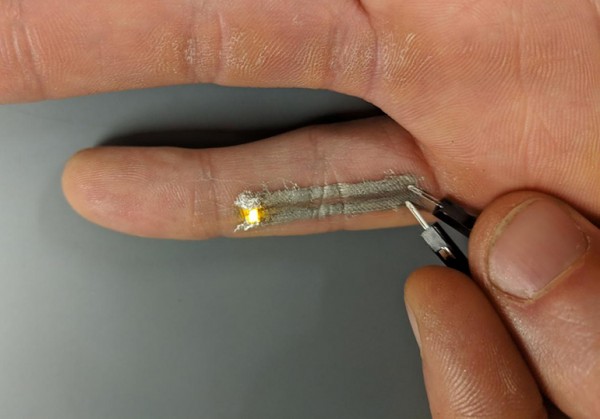 Although the researchers do not see this technique as a feasible replacement for large-scale production of wearable electronics, they believe that this has potential value for applications such as rapid prototyping where customization based on customer needs is a must.

The similar technique, focused on the potential of silver nanowire ink for electronic tattoos, was also discussed in a previous issue of Nanoscale.