Space Oven is Ready for a Test Cook-Off 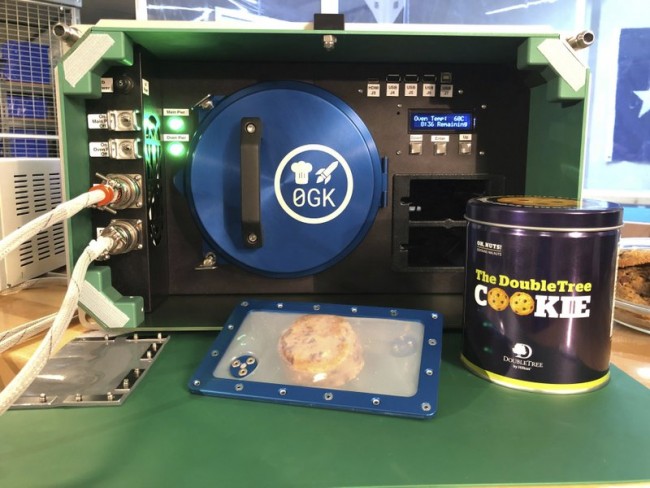 Eating is entirely a different matter when you're an astronaut. First, you have to prepare the right quantity of food and astronauts brought it with them when they took off for the International Space Station. Second, they have to observe safety in the types of food they bring. For example, salt and pepper should be in liquid form, or else there will be a risk that the solid particles get stuck in vents and may cause damage along the way. Also, astronauts don't exactly cook at the ISS; what they have are food warmers. Food preservation also takes more effort in space, and astronauts really have to store their food properly to avoid spoilage.

According to their website, what they have in mind for this particular project is to design a "container that will be able to hold and bake food in the microgravity environment of the International Space Station." The oven comes with a tray where the food samples are placed and held steady. The venting mechanism, along with its insulation, are electricity-dependent, and it allows the oven to operate safely in a controlled environment. ZeroG Kitchen Space Oven has successfully passed all safety reviews conducted by the National Aeronautics and Space Administration (NASA).

The oven is relatively small: its interior's length is 4.2" x 8.8". The total interior volume is 122 in^3 and its nominal internal temperature is 350 degrees Fahrenheit. Since the oven is electric, the oven will get its electricity from the internal power system of the International Space Station.

When cooking, the food is packed in silicone pouches. This will give the user a clear view of the contents of what goes inside. There are two 40-micron filters within these silicone sheets, and it allows steam and hot air to escape. This will also prevent cookie crumbs from getting out and possibly cause damage to sensitive equipment. The trays that will hold the food are developed with an anodized aluminum frame to provide structure and enable food security during the cooking process.

In an interview with the Associated Press, Jordana explains: "The kitchen is really sort of the heart of the home to me, and the oven is kind of where it's at. So just to make (space) more comfortable and make it more pleasant, more delicious." Jordana's husband, Ian, works in the space business, which gave them the leeway to put their product to test.

The space oven is a project done in collaboration with NanoRacks, which designed and built the actual oven and also arranged the flight and DoubleTree Hilton, which, in turn, provided the cookie dough (same dough they used in their hotels). The space oven's liftoff is scheduled this weekend, along with a sample of cookies on the Cygnus capsule developed by Northrop Grumman.