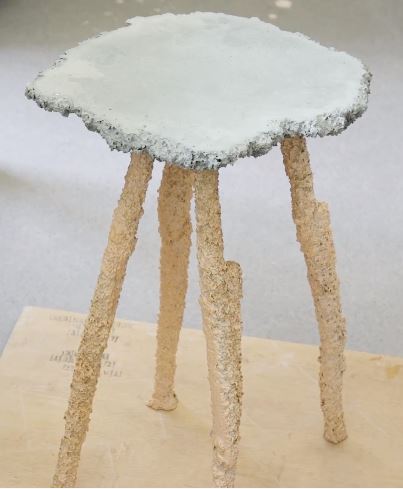 (Photo : Screenshot from: University of Plymouth / YouTube)
One of the furniture pieces cast by Gavin Keightley using various food items as casting mold.

University of Plymouth graduate and Designer Gavin Keightley has found a way to use food such as mashed potatoes and jelly in creating his latest furniture collection.

Included in the Keightley's new furniture collection are a series of stools and two cabinets, both with components fabricated from a combination of jesmonite and plaster dyed in fluorescent hues. The molds used to cast each furniture are made from various food items.

Keightley has always been enthusiastic about exploring alternative applications for various materials that can be used for art and the various processes as well. As a result, the artist has put forward an attempt to identify a possibly more sustainable way of casting sculptures.

According to Keightley, since he does a lot of casting, he would use a lot of molds, however, most of the materials that are available on the market are synthetic, which leads to more production waste. This has prompted the designer to begin a hunt for natural alternatives that can be used as a casting material, which would also give Keightley the finished product he envisioned.

Interestingly enough, the artist found the solution in a bowl of couscous that has turned into a hardened mass. Removing the failed dish from the bowl, Keightley found that the hardened couscous retained its shape. It was during this time that the artist realized that overcooked couscous, among other food items, could be used as a molding material. The resulting details in the surface exhibit the unique properties that each food item has to offer.

Keightley recounted how a whole library of materials was opened up when he was inspired to consider food as a material with various properties, instead of thinking of it as just an item of nourishment. The designer also added that food is undervalued and under-used as a material.

One of the food items that Keightley used is agar jelly. This food item comes in the form of a powder that is usually packaged in sachets. To use agar jelly, it is mixed with water and heated. After this, it will set into a gelatinous form.

Keightley followed the said cooking instructions for the agar jelly. Later, he carved out sections from the jelly with the use of a spoon. This created a negative cavity that is perfect for casting. The jelly is then peeled away when the casting material has set.

Aside from jelly and couscous, Keightley also used mashed potatoes, peanut butter, rice, noodles, and bread to cast his recent collection. This proves that many other different food items have the potential to serve as a molding material.

Once done, the artist composts the used food items. Keightley is currently looking into growing his own food items that can be used in casting. This way, there will be a full circle in his production cycle

The items in the series are made of jesmonite, which can pick up all the details of the mold material, and pewter which also has unusual and unpredictable textures as it reacted with high-fat molding materials. Each furniture item in the series is embedded with a metal frame, which works well with jesmonite.

Keightley stated that it is a human's instinct to touch and feel things to understand the things around them. With this, the artist wanted to offer a multi-sensory experience by creating furniture that is made out of food as the people would instinctively also want to smell the furniture pieces.

The collection has been presented at the recent Decorex Fair in London and exhibited at the Dutch Design Week Eindhoven.