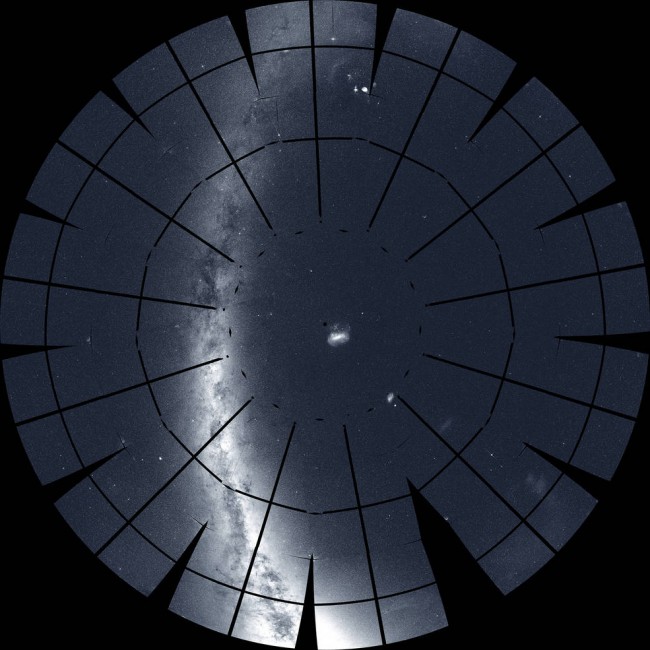 (Photo : NASA) The panoramic view of the southern sky created by Ethan Kruse. This mosaic is made from 208 satellite images and showcases the Milky Way, the Orion Nebula on top, and the Large Magellanic Cloud in the middle.

Exoplanets are distant planets that orbit other star systems. Sometimes they are hard to see or be identified by our telescopes because they are usually overshadowed by the brightness of the star they orbit. To search for these elusive exoplanets, the National Astronomical and Space Administration (NASA) launched Kepler in 2009. In its 9-year run, Kepler was able to find at least 2,700 exoplanets, most of which are rocky planets and maintain a special distance from the star they orbit creating the habitable zone where life could be possible.

After Kepler's retirement in 2018, NASA, with the help of tech company SpaceX, launched TESS, a sky surveying satellite that is specifically designed to capture the skies in two years, breaking it to 26 sectors (measured 24 degrees by 96 degrees each sector).

Named Transiting Exoplanet Survey Satellite, TESS is designed to follow Kepler's footsteps in the search for exoplanets. SpaceX developed TESS to cover areas 400 times larger than Kepler was able to observe stars that are 30-100 times brighter. SpaceX launched the satellite in April 2018 in Florida at the Kennedy Space Center and is tasked to survey 200,00 stars in its lifespan.

In a press release, NASA postdoctoral fellow Ethan Kruse explains: "TESS data focuses on individual stars and planets one at a time, but I wanted to step back and highlight everything at once, really emphasizing the spectacular view TESS gives us of the entire sky."

It was Kruse who created the mosaic of the panoramic view captured by TESS at NASA's Goddard Space Flight Center. The mosaic was made of 208 satellite images taken from TESS' first year of operation, focusing on 13 sections of the sky. Each of these sections was captured with an interval of one month using four cameras.

In the panoramic view, there are at least 29 exoplanets captured and more or less 1000 candidate planets. All in all, there are 4,084 exoplanets listed on NASA's Exoplanet Archive - and these are all confirmed planets - which makes a promising career for TESS.

To be able to perform tasks such as detecting exoplanets, TESS uses the transit method. In the transit method, the satellite will observe a star and measures a sudden dip in its brightness. The sudden dip means there is a planet in its orbit that obstructs the view of the satellite. When this happens, TESS will then send a signal to its ground-based team for a closer look. By this time, the ground-based team is able to identify the planet's orbit by measuring how long it can block the light and by how much light is blocked in the process and, lastly, its mass. By identifying these, it can be determined whether or not the planet is rocky, gassy, or made up entirely of different compositions.