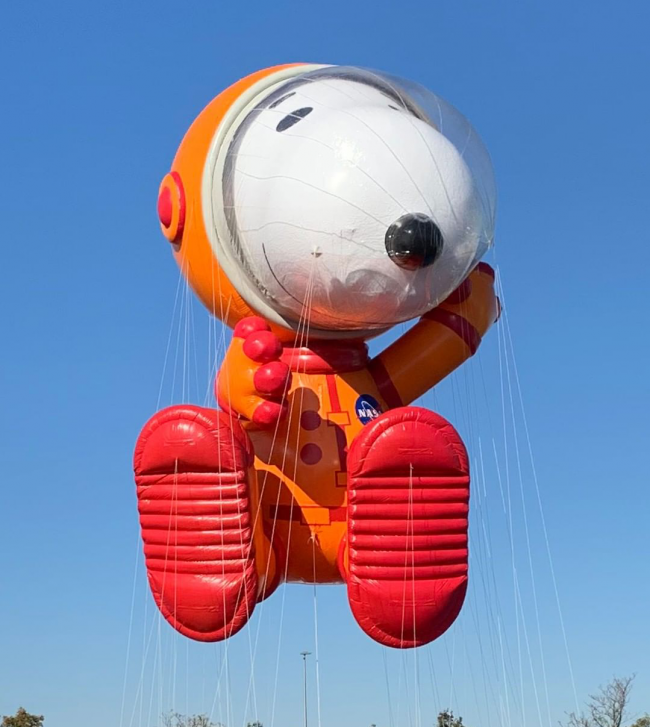 (Photo : Snoopygrams) Astronaut Snoopy's balloon float in the Macy's Thanksgiving Parade is a part of NASA's celebration of the first moon landing.

Astronaut Snoopy is no longer just a comic book character and mascot. Last Nov. 28, the "world-famous astronaut" took flight and went aboard the International Space Station -- just in time for Macy's Thanksgiving Parade, which features a Snoopy plush doll donning an orange astronaut suit complete with the NASA logo floating aboard the orbiting laboratory.

Who is Astronaut Snoopy?

For those who are not familiar with comic book characters, Snoopy is the famous beagle from the comic strip Peanuts created by Charles Schulz in the 1950s. Snoopy, throughout the entirety of Peanuts has had a number of personas, including Astronaut Snoopy, which first appeared in the Macy's Thanksgiving Parade back in 1969 following the launch of Apollo 10 command and lunar modules which were named Charlie Brown and Snoopy.

Astronaut Snoopy has been NASA's mascot since 1968, a product of a 51-year partnership between the Space Agency and Peanut, first to promote safety in human spaceflight and in recent years, to use the famous cartoon beagle to promote science, technology, engineering, and mathematics and encourage children to be interested in those fields.

Why is Astronaut Snoopy's Appearance in the Macy's Thanksgiving Parade a Big Deal?

Astronaut Snoopy went on board the International Space Station as a part of NBC's television coverage of the celebration and was welcomed by NASA crew members Jessica Meir and Christina Koch -- the first female astronauts to do the spacewalk (READ: Christina Koch and Jessica Meir Execute First All-Woman Spacewalk). In the broadcast, Meir narrates, "Snoopy has been along for space rides since the Apollo era. Today, he's floating in the Macy's parade and here in space."

Back on Earth, Astronaut Snoopy's 49-foot-tall helium balloon for the parade dons the bright orange spacesuits complete with NASA's logo and red-soled boots. This is patterned after the Orion Crew Survival System which will be worn by astronauts who will be included in the Artemis missions to the moon and. Eventually, Mars.

The 8-inch Astronaut, Snoopy plushie on the ISS which wore the same bright orange suit, was launched to the space station aboard the Northrop Grunman Cygnus cargo spacecraft last month along with a handful of stuff for the astronauts in the space station (READ: Space Oven is Ready for a Test Cook-Off).

However, the announcement of Astronaut Snoopy's inclusion in the launch was not announced until Nov. 2 by Peanuts Worldwide, the company which handles the comic strip.

The partnership between NASA and Peanuts continues not only during the Thanksgiving parade but also through the launching of a new line of toys via McDonald's Happy Meal and a new cartoon and a new cartoon series called "Snoopy in Space" which will be available on Apple TV+. The animated series aims to engage children in space exploration and activities.

Lastly, Astronaut Snoopy's presence in the ISS reminds people of the upcoming anniversary of the first-ever crew to reside on board in November of the year 2000. Astronaut Snoopy plush doll was created by Hallmark.