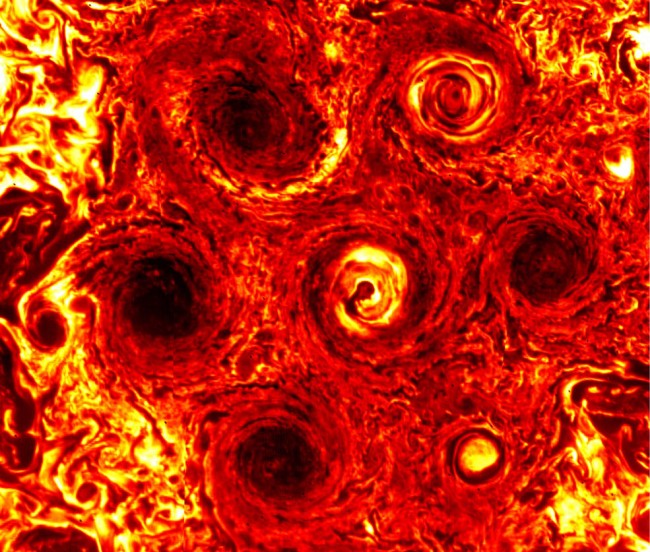 When we think we know all there is to know about the gas giant, surprises like this eventually makes itself known. Last month, NASA's Juno spacecraft was able to discover a giant new storm near the planet's south pole.

The Juno spacecraft was able to discover the giant storm during its death-dodging flyby last Nov. 3, and it was observed that the Texas-sized storm is actually made up of six other cyclones.

Jupiter's south pole has always been prone to storms. Prior to the discovery of the hexagon storms, five cyclones formed a pentagon around a central storm, which is as wide as the United States itself. The Juno spacecraft's newfound storm completes the hexagon. In a press release, Juno scientist Cheng Li from the University of California, Berkeley stated, "these cyclones are new weather phenomena that have not been seen or predicted before. Nature is revealing new physics regarding fluid motions and how giant planet atmosphere work." Cheng Li also explained that because of this discovery, astronomers are now beginning to grasp how atmospheres on giant planets such as Jupiter work through observations and computer simulations. He adds that future flybys done by the spacecraft can further help in refining the understanding of the atmosphere by revealing how the cyclones evolve over time.

HOW DID JUNO DISCOVER THE HEXAGON CYCLONES?

The Juno spacecraft is designed to orbit Jupiter on an elliptical path and gather data whenever it gets too close to the planet. Last Nov. 3 was the most recent close flyby done by the spacecraft, and it was close. According to the officials from NASA, the Juno spacecraft was able to skim 2,175 miles above the planet's cloudy atmosphere.

The success of every close flyby done by the Juno spacecraft is due to its flight design. Steve Levin, Juno project scientists from NASA's Jet Propulsion Laboratory, said that it was a close call. The team designed the Juno spacecraft to orbit in Jupiter's shadow for 12 hours, which could be dangerous for a solar-powered spacecraft.

Luckily, Juno's navigation team came up with the strategy the call "Jumping Jupiter's Shadow," wherein the handlers of the Juno spacecraft directed for it to ignite its small reaction-control engines in pulses every 10 and a half hours. In effect, this pushed the Juno spacecraft outward steadily and out of the shadow path. "Without that maneuver, without the creative genius of the folks at JPL on the navigation team, we wouldn't have the beautiful data we have to show you today". Levin said.

In a highly anticipated event, the Juno spacecraft was launched in 2011 at Cape Canaveral, Florida, and arrived at the orbit of Jupiter two years later. The Juno spacecraft was designed to study the planet's composition and gravitational and magnetic fields to help astronomers better understand how Jupiter and the solar system were formed and how it evolved.

The Juno spacecraft was built by Lockheed Martin and is operated by the Jet Propulsion Laboratory.