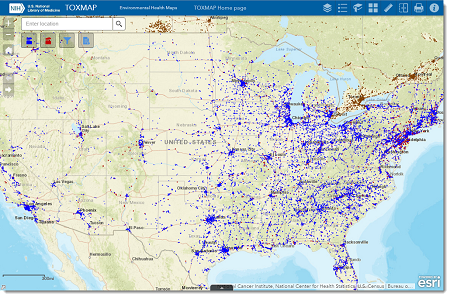 It hasn't been a day after Christmas, and netizens found a surprise they are not really fond of. Netizens are alarmed to find that the TOXMAP database was pulled from the Internet after serving as an interactive map that allowed the public to locate sources of pollution for 15 years.

In response to the Emergency Planning and Community Right to Know Act, the Toxicology and Environmental Health Information Program of the National Library of Medicine developed a database that will show the geographical distribution of releases by chemical and the number of chemicals released and how it changed over time. Using Geographical Information System, the TOXMAP database uses maps of the United States to show the specific locations where industries release specific chemicals.

The map displays hosted by TOXMAP are integrated with relevant bibliographic references and other data and thus providing a map-based portal to these journals. The TOXMAP database also provides links to chemical information that can be found in TOXNET's Hazardous Substance DataBank and other authorities.

Aside from mapping chemical excretions from corporations, the TOXMAP database is developed to integrate geographically coded data from other resources and provide information about Geographical Information System and map interpretation to make information easy to navigate and understandable for beginners in the GIS.

WHAT ARE THE IMPLICATIONS OF THE DISAPPEARANCE OF THE TOXMAP DATABASE?

Netizens observed that while the information found in the TOXMAP database is transferred to other websites, there is some information missing. According to a press release by the National Library of Medicine, several resources available in the Toxicology Data Network, including the TOXMAP database, will be available on the websites of other organizations involved, such as the Environmental Protection Agency. However, some information will be retired. "Part of the decision was prompted by the increasing availability of the underlying data from their original sources. Many sources, such as the EPA, among others, offer several products that provide similar geographic information system functionality." The statement explained.

However, some netizens believe that the disappearance of the TOXMAP database is in line with the rollbacks in the environmental policies ordered by President Donald Trump. An article published by Chris Sellers of the Environmental Data & Governance Initiative (EDGI) wrote, "TOXMAP's end accords with a larger pattern spanning federal environmental agencies whose intentions have been far from quiet, even loudly trumpeted. The dismantling of such a usable public platform connecting health and environmental data certainly accords with the EPA's own declared strategies, of seeking to exclude so many environmental health studies from policy-making and to neglect or defund on-going environmental health investigation."

The article went on to explain that the disappearance of the TOXMAP database is an effort of the Trump administration's war against science and the environment, thinking that by sweeping these facts under the rug will diminish every American's concerns about the environment.

Aside from pinpointing places of chemical dumps, the TOXMAP database allows users to find points of interest, such as areas being cleaned up by EPA's Superfund program. The Superfund program was established in 1980 as a result of public outcry over widespread toxic waste dumps that are threatening the health of the people near it.

WHAT DID THE NLM HAVE TO SAY ABOUT THE DISAPPEARANCE OF THE TOXMAP DATABASE?

Unfortunately, the National Library of Medicine was only able to offer brief explanations regarding its decision to retire the TOXMAP database. In a statement published with Undark Magazine, the NLM communications staff explained that the Library is trying to meet the goals of the new strategic plan and that they had to make difficult decisions.

On the other hand, the EPA can provide the data produced by the TOXMAP database through its Enforcement and Compliance History Online (ECHO) site where people can enter a zip code and view a pollution source nearby complete with the toxic data. However, researchers are not happy with the alternative because it does not offer the same scope and simplicity as TOXMAP. Sellers explained, "because this information has gotten so complex, and there's so much of it, it's very difficult for someone who is not really trained in the area to navigate it."

Claudia Persico, an environmental policy scholar from the American University whose study on the impact of pollution on children's health, was assisted by TOXMAP explained to Scientific American, "I think it's really sad that they're getting rid of this. It was stunning to me that the National Library of Medicine is actually retiring this pretty essential tool for our environmental right-to-know."

READ: Concrete Climate Solutions are the Key to End These Climate Protests