Red Supergiant Star Betelgeuse Continues to Dim. Is This Goodbye? 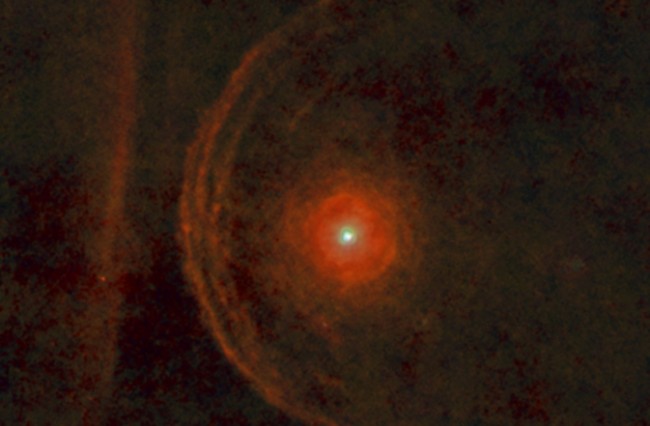 (Photo : NASA/Herschel Space Observatory) The brightest star on Orion's shoulder is getting dimmer.

In the new paper Fainting of the Nearby Supergiant Betelguese, astronomy professor Ed Guinan of Villanova University explained that the red supergiant has been declining in terms of brightness since October this year.

For astronomers and those who simply love looking at the night sky, Orion is one of the most spectacular (and most easy to spot) constellations visible during the winter and it's "shoulder" star, the red supergiant Betelgeuse shines the brightest. However, as Guinan and his colleagues note, Betelguese is 2.5 times fainter than usual and has fallen from its position of being the 9th brightest star to being the 23rd.

Observing the activity of Betelgeuse has been the work of Guinan and his colleagues for decades and has been covering the red supergiant since 1980. According to the team, the red supergiant star Betelgeuse has dimmed significantly over the past decade that it can mean something extraordinary is going to occur. In an interview with CNN, Guinan explained that primarily, the cause of a supernova can be found inside the star and because stars are usually huge, it is impossible for astronomers to tell what's going on.

This is exciting because Betelguese is relatively close to Earth with a distance of 700 light-years. According to Guinan, the red supergiant star Betelgeuse is a sure candidate for a supernova as the star is roughly 9 million years old and red supergiant stars don't exceed the 10 million mark. However, he clarifies that we may not be able to experience its explosion in our lifetime.  "It'll probably happen in the next 200,000 or 300,000 years," he said.

IT'S JUST A PHASE!

The potential supernova from the red supergiant star Betelgeuse sparked curiosity. However, some astronomers would like to clarify that the red supergiant star Betelgeuse is classified as a variable star which means it can regularly shift from being bright to be dim so it might be just a phase and it has been that way since its discovery by Sir John Herschel in 1836. This cycle often lasts for 420 days and the red supergiant star was observed to undergo normal dimming for months and is expected to end the cycle by January. "I personally think it's going to bounce back, but it's fun to watch stars change. If it continues dimming, then all bets are off."

Hypothetically speaking, if the red supergiant star Betelgeuse is to explode, it will be bright enough for us to see it even in the light of day. Betelgeuse will glow a vibrant blue for three or four months and eventually fade after a year. Also, since Betelgeuse is relatively close to Earth, it can make an impact. There will not be any direct danger to life but ultraviolet radiation can affect the Ozone layer.