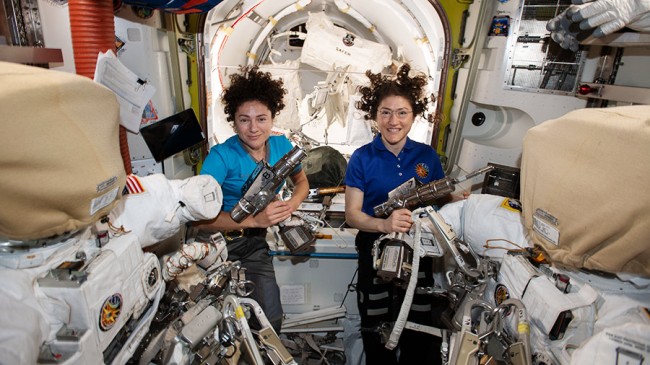 Early this week, NASA astronauts Christina Koch and Jessica Meir once again made history as they accomplished their third spacewalk to replace the aging batteries at the International Space Station.

The spacewalk began early last Monday, January 20 at 6:30 in the morning marking a historic event -- this is the third time an all-woman team did a spacewalk. NASA provided live coverage of this event which they posted on their social media sites.

The International Space Station is mainly powered by the Sun and astronauts harness this power for the laboratories and lighting rooms to be able to conduct experiments. Koch and Meir replaced the old generation nickel-hydrogen batteries with upgraded lithium-ion batteries which are expected to last longer. After this spacewalk by Koch and Meir, another one is coming up but this time it will be done by astronaut Andrew Morgan and Italian ISS commander Luca Parmitano this coming Saturday, January 25.

Unlike Koch and Meir, Parmitano and Morgan will be doing a different task: they will be working on the Alpha Magnetic Spectrometer, an aging dark matter experiment in the space station. With the help of engineers from the ground, the astronauts will be doing a complex repair. According to NASA, this is, by far, the toughest work the agency has done in space since the upgrade of the Hubble Space Telescope in 2009. Parmitano and Morgan already accomplished three out of four planned AMS spacewalks for 2019. Last December, the agency gave a warning that the battery spacewalks should be prioritized and there is a busy schedule for visiting space vehicles and this can cause delay to the last AMS spacewalk.

This week, NASA announced that they plan to accomplish all spacewalks before three members of the Expedition 61 crew returns to Earth through a Russian Soyuz spacecraft. Only three astronauts will remain in the ISS while the agency works out the sequence of future missions which are currently under discussion since American-made commercial crew vehicles are still under testing.

Before this historic spacewalk, Koch made another record for staying 300 days at the International Space Station, making her the first woman to have an extended stay at the ISS. According to NASA administrator Jim Bridenstine, extended missions similar to Koch's can help scientists gather data about the effects of long-duration spaceflights. Doctors back on Earth are interested in the changes in bone mass, muscle strength, pressure in the eyes which are all known to worsen after a prolonged period of exposure to radiation in space.

Christina Koch's milestone is among the elite group of astronauts who had a prolonged stay in the ISS.