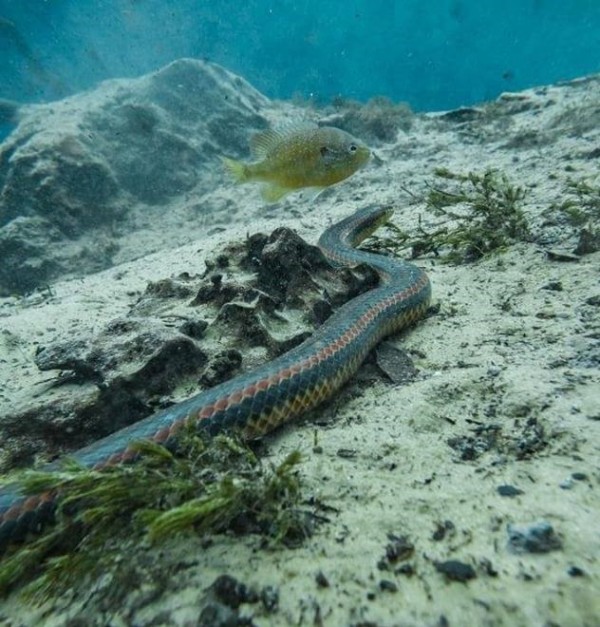 (Photo : Facebook)
Rainbow snake in Cypress Springs in northwest Florida
Experts say that the elusive snake found by the hiker in a forest in Florida is indeed the multi-colored serpent that has not been seen in 50 years.

According to a Facebook post by the Florida Fish and Wildlife Conservation Commission (FWC), the 4-foot long rainbow snake (Farancia erytrogramma) is seen by Tracey Cauthen slithering at the Ocala National Forest while she is hiking.

She was able to take a photoof the snake and experts from the Florida Museum of Natural History confirmed that this is the first record of the snake's sighting in 50 years since 1969. It is nonvenomous and harmless according to the museum.

Furthermore, the institute said that "rainbow snakes are highly-aquatic, spending most of their life hidden amongst aquatic vegetation; seldom seen, even by herpetologists, due to their cryptic habits."

It is believed that this snake made a rare appearance on land due to a recent change in the water levels in the Rodman Reservoir. The serpent is nicknamed as the "eel moccasin"  after its penchant for eating an eel. However, younger ones tend to feed on amphibians such as tadpoles, and other fishes.

Rainbow snakes are not always seen because they burrow underground near the shore or hide under the floating vegetation. This subterranean manner of the snake makes it an uncommon sight, even for those who study amphibians and reptiles or the herpetologists.

According to the Florida Museum of Natural History, a fully grown, an adult rainbow snake can grow between 40 to 50 inches. The snake might use its tail as a defense mechanism when hunted or captured. Experts say that the tail is harmless and cannot break a human's skin on a human hand so there is nothing to worry about.

Adult rainbow snakes are large and thick-bodied. Its pupil is round, and it has 19 dorsal scale rows at midbody. The snake's back is iridescent blue-black that has a bright red stripe down to the middle and a reddish-pink stripe on each side. The lower sides of its body are yellow or pink fading into the red belly. Each belly scale has black spots that form into three lines of dots down the snake's belly. Rainbow snake has also a yellow chin and throat.

It lays an average of 10-52 eggs in moist areas. Females are found to coil around their clutches of eggs. They hatch in late summer but may overwinter in the nest before emerging. Much is unknown about this snake's ecology because of their secretive behavior and most information that we have about them is from the research conducted by the Savannah River Ecology Lab where a large number of snakes have been captured than the other regions.

This species is protected throughout Georgia and rely on aquatic habitats and eels for food. This may put them to risks when wetlands are destroyed or degraded or if rivers become a dam resulting in a decrease in several eels.

The museum also added in their statement that sightings of the rainbow snake in Florida are most commonly witnessed throughout Panhandle and the northern peninsula and can also be found along the coast from Louisiana to Maryland.