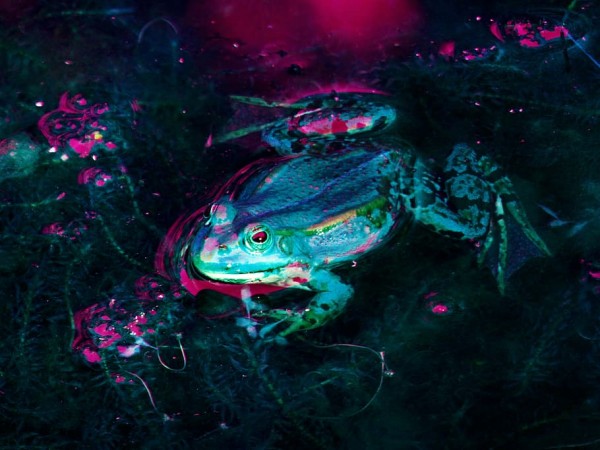 A lot of animals, specifically coming from marine species such as fish, corals, and land creatures have some hidden abilities and skills they are said to be characterized in gleaming red, blue, or green when under certain types of light. However, when it comes to amphibians, experts claim to be familiar with only three frogs and a single salamander which have been described fluoresced up to present.

Biologists Matthew Davis and Jennifer Lamb shone ultraviolet and blue light on over 30 species of amphibians which include frogs, salamanders and wormlike caecilians at changing life phases. To the experts' surprise, everything lit up, becoming brilliant shades that range from green to yellow. This was reported by the researchers late this week. The impact was strongest in blue light. Of all the four-legged animals, the ability to absorb energy with higher blue-light energy, and release lower green-light energy had previously been recorded in marine turtles. The new result recommends that the so-called biofluorescence is widespread in most amphibians.

The researchers found that various species are glowing in many different patterns. Some, like the Ambystoma tigrinum or the eastern tiger salamander, unveil blotches or strips of color. In other species such as A. opacum or marbled salamander, bones and some parts of these specific species' undersides are lighting up.

Even though the researchers did not examine mechanisms that the amphibians use, the animals probably depend on pigment-containing cells and fluorescent proteins. Various mechanisms would suggest that the capability went around self-sufficiently in various species, instead of being passed down by the modern amphibians' ancient ancestors.

Biofluorescence may be helpful for both frogs and salamanders, especially when they find themselves in a situation under low light. Specifically, the creatures' eyes contain cells, particularly sensitive to blue or green light.

Through this concept, scientists could connect the ability of amphibians, utilizing special lights in search of animals while biodiversity is ongoing - specifically for animals blending into their surroundings or, as observed by the researchers, "hide in piles of leaves."

Incidentally, lambs have already shown some hints that might be effective. As the creatures are prowled, their family's woods in the dark or at night with blue light, they're spotted that revealing glow.

By definition, Biofluorescence, specifically, is the electromagnetic radiation's absorption "at a single wavelength which is followed by its reemission at lower energy and longer wavelength by a living organism." Past studies have recorded the prevalent presence and availability of biofluorescence in certain animals, which include cartilaginous, arthropods, ray-finned fishes, cnidarians and arthropods. Moreover, numerous studies on this absorption of electromagnetic waves have concentrated on marine animals, again, specifically in cartilaginous, ray-finned fishes and cnidarians. However, the experts know comparatively little about fluorescence's presence in tetrapods. It has been shown for the first time that this electromagnetic absorption is prevalent across Amphibia with a concentration on Caudata or salamanders, a diverse group with a fundamental Holarctic distribution.