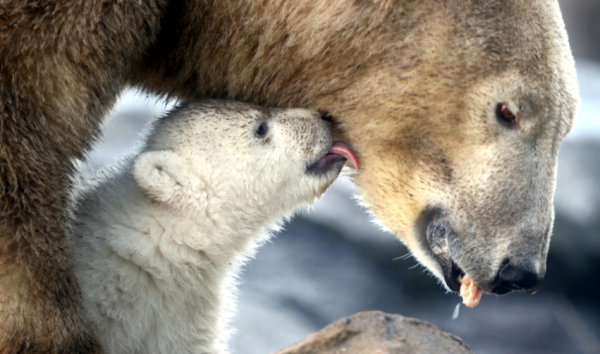 (Photo : Reuters)
Female polar bear Nora and its unnamed polar bear cub are seen in their enclosure at Schoenbrunn zoo in Vienna

Increasing reports of a polar bear being forced to resort to cannibalism for food, alarms scientists.

If you're familiar with the popular three bear siblings entitled 'We Bare Bears', surely you have noticed Ice Bear the polar bear. Isn't he adorable and cute?

Sad to say, with the ice caps melting and the polar bears losing their habitat and food source, that cartoon might be the only cute polar bear we will see because, in real life, they are slowly dying.

A video shot by Paul Nicklen and Cristina Mittermeier of the nonprofit group Sea Legacy, published on National Geographic in early December 2019 shows the devastating condition of a polar bear on an ice-less land. With the sea ice melting, polar bears are likely to starve soon.

Polar Bears need to eat 60% more than anyone has realized. Despite sitting around most of the time, these bears are high-energy beasts.

But with climate change now, their diet is extremely affected. The ice is melting, forcing the bears to look for food sources farther and farther away from their homes burning a lot more than they consume. A polar bear's diet is mostly made up of seals.

A Russian scientist reveals that animals are feeding on each other in the Arctic because of the melting ice and fossil fuel extraction has destroyed their habitat. The researcher also added that the rise in cannibalism can also be attributed to an increase in human activity in the Arctic who are there to witness the horrific event.

To blame in the polar bears' newfound cannibalism as well are the humans who are setting up shop in the bear's homes for fossil fuel extraction. The oil and gas development in the Yamal Peninsula and the Gulf of Ob is what disturbs their shelter. The area from Gulf of Ob to the Barents Sea, where polar bears usually hunt has now become a busy route for ships carrying the Liquefied natural gas or LNG.

Russian scientist, Vladimir Sokolov, who has led many expeditions already in the Arctic and Antarctic Research Institute, said that the abnormally warm weather on Spitsbergen Island to the north in Norway's Svalbard archipelago has greatly affected the polar bears.

In a separate study, it was found out that polar bears hoard the bodies of their kills by burying them in the snow and dirt and retrieve them later when they needed it. Relatively common behavior in bear species, especially to brown bears where polar bears evolved 500,000 years ago, this behavior is referred to as caching.

Why do Polar Bears Need Ice To Survive?

Without ice, the polar bears will have difficulty in hunting their food. They need it as platforms to reach their prey of ringed and bearded seals which mainly composed their diet.

Like most species at the top of the food chain, polar bears have a low reproductive rate. One or two cubs are born every mid-winter and it stays with the mother for about 2 years. Also, female polar bears only breed every three years and don't reproduce until they are five or six years old.

In short, if there is no ice, then seals will not be able to haul out on the ice and polar bears cannot continue to hunt.

"Cases of cannibalism among polar bears are a long-established fact, but we're worried that such cases used to be found rarely while now they are recorded quite often," polar bear expert at Moscow's Severtsov's Institute of Problems of Ecology and Evolution Ilya Mordvintsev said in an interview.

In 2019, 50 polar bears wandered into a settlement in Russia's Novaya Zemlya Islands forcing the government to declare a state of emergency. This might happen again if the sea of ice continues to melt and polar bears lose their homes, then cannibalism may not only be our problem.