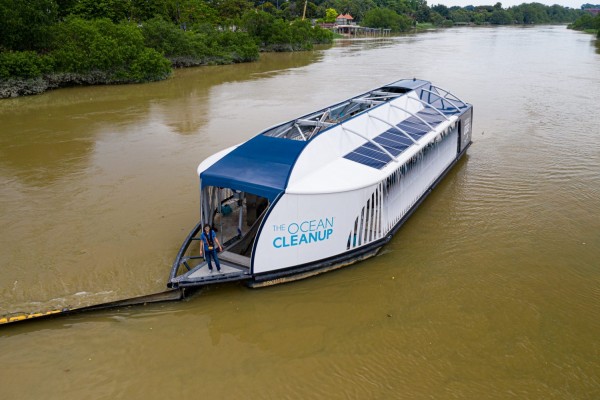 To strengthen its initiative in removing plastics from the oceans, Dutch-non-profit organization, The Ocean Cleanup (TOC) recently launched a robot that is said to clear 80 percent of the rivers all over the world within five years.

This is yet another idea for the organization to trace the main source of all plastics that flow into the sea. Additionally, the Ocean Cleanup's latest innovation called, "Interceptor" is a floating device powered by solar system "that scoops up plastic waste" that floats on the surface of the water, and leads it "onto the conveyor belt" then, into the bin for recycling.

This technology was initially introduced and showcased in the Netherlands. As such, the Interceptor has already gained quite a challenging reputation as the environment's defender.

Additionally, the device functions by plucking around 30 tons of garbage every day from Malaysia's Klang River, where one of the organization's first vessels has been clearing out wastes for a couple of months now.

Prior to its official launch, this model has been tasted since May last year, according to the Ocean Cleanup, "near the Cengkareng drain's mouth," connecting the notoriously trash-laden Angke River of the city, to the Java Sea.

Meanwhile, the prototype of Jakarta is what TOC describes as its "first generation of the device," which it aims to set out in 1,000 of the most populated rivers of the world, in just five years. More so, TOC has approximated the said waterways are accountable for containing 80 percent of the ocean rubbish out to sea.

The remaining 20 percent of the ocean garbage, on the other hand, comes from roughly 30,000 other rivers.

To date, there are two Interceptors installed from which, TOC said, the second is in Kuala Lumpur, specifically on the Klang River. TOC managing director, Chris Worp said, this month, they plan to deploy one more (the third) Interceptor in the Dominican Republic, particularly in Rio Ozama.

The fourth, Worp added, is set for deployment in Southern Vietnam. Relatively donors from anywhere in the world have pledged millions of dollars in this organization to help in accomplishing the so-called "novel" and "ambitious" solutions to this curse of "oceangoing trash."

Donors from all over the world have invested millions of dollars in TOC to help the organization accomplish what it says are "ambitious" and "novel" solutions to the scourge of oceangoing trash. The process though, the TOC official admitted, has not been smooth.

How the Interceptor is Designed

The river-clearing initiative is part of the overall objective of TOC in the reduction of the amount of garbage in the ocean. Boyan Slat, the organization's CEO founded TOC in 2013 to develop an open-ocean device aimed at removing all plastic wastes in the "Great Pacific Garbage Patch" in a span of five years.

After several repetitions and too much criticism from scientists and attention from the media, 525-foot test design gathered and retained ocean plastic wastes for the first time in October 1019.

The Interceptor functions via solar panels on top of its white exterior shell. The unique number of each device is pointed on one side that faces the river's banks. At water level, along barrier from wastes overhangs upstream, letting the current's force to push waste toward the mouth of the device.

There, a conveyor belt that takes the rubbish out of the water then puts it onto a platform inside the Interceptor, shuttling trash to one of the dumpsters. When the containers are full, the local team empties them by taking them to the shore.

The newest design of the Interceptor can remove 50,000 kilograms or 110,000 pounds of plastic wastes every day. More so, it can carry up to 50 cubic meters or 1,770 cubic feet of trashes.