COVID-19 Patients Can Shed 1,000 More Viruses Than SARS During The First Week of Symptoms 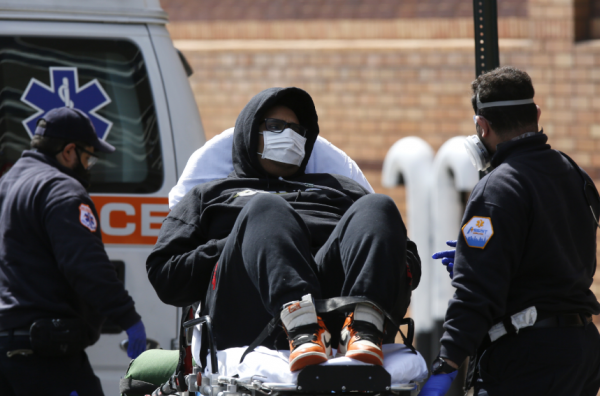 (Photo : reuters)
A patient is wheeled by Emergency Medical Technicians (EMT) into the Wyckoff Heights Medical Center in Brooklyn during the outbreak of the coronavirus disease (COVID-19) in New York City, New York, U.S.

Coronavirus patients are most likely to pass on the virus to other people during the first week of symptoms, according to a new study. In an early, and yet "limited" study in Germany, 9 patients show very high levels of the virus in their throat at their earliest onset of sickness, according to research published in Nature journal.

Researchers led by Christian Drosten from the Charite Universitatsmedizin in Berlin said in a report on March 8 that about 17 percent of pathogens are isolated in the nose and throat swabs and more than 83 percent of phlegm samples during the first week.

Clemens Wendtner, director of infectious disease and tropical medicine at Munich Schwabing, and together with his colleagues found that coronavirus patients produced thousands to millions of viruses in their noses and throats 1,000 times as much as produced in SARS patients.

Finding the RNA of a virus in a sample does not guarantee that the virus is alive or infectious, Ali Khan, dean of the College of Public Health at the University of Nebraska Medical Center in Omaha explains. Some of it is discouraging news because it explains why there are a lot of cases of transmission in communities.

That means that those people infected could still be going about their daily lives and unknowingly infecting other people as well. Scientists said that their findings could offer a glimpse into the rapid spread of coronavirus and offer guidance for overwhelmed hospitals around the world that are running short in medical supplies and equipment.

10 days after first showing signs of the illness, several patients who are showing milder symptoms could safely be and self-isolate at home.

After about 10 days or so, when the antibody production turns on people are not likely to be infecting others. Other studies also suggest that people with very mild symptoms or asymptomatic infections do not shed as much virus and are not as likely to infect others compared to coronavirus infected people with more severe cases, says Khan.

"In a situation characterized by the limited capacity of hospital beds in infectious diseases wards, there is pressure for early discharge following treatment," according to the scientists of the research.

Early discharge of coronavirus infected patients who are beyond their 10 days of showing symptoms could be chosen with ensuing home isolation provided that they have less than 100,000 viral RNA copies per ml of sputum.

Based on cell culture, both criteria can predict the little remaining risk of infecting other people. The scientists further added that more research is needed to help assess the relationship of the increase in the viral load of a patient after the first of symptoms and the signal of aggravation of symptoms.

Also Read: Recovered COVID-19 Patients in Wuhan Tested Positive for the Second Time: Are they Infectious?

No virus found in blood and urine

The team of researchers never found evidence of the virus in blood and urine and has stopped collecting samples from the second wave of 23 coronavirus patients being treated at the hospital. However, researchers were able to detect viral RNA in the patients' feces, but the infectious virus was not there which suggests that the virus is not spread through stool.

Wendtner said that the contagiousness of the virus tells us that gatherings should really be avoided, although results may also suggest that isolation periods could be shorter for people who have RNA but without the virus weeks after symptoms are gone which make the patients infectious for that long. Most patients are not discharged not unless their results from two separate tests come back negative within 24 hours.