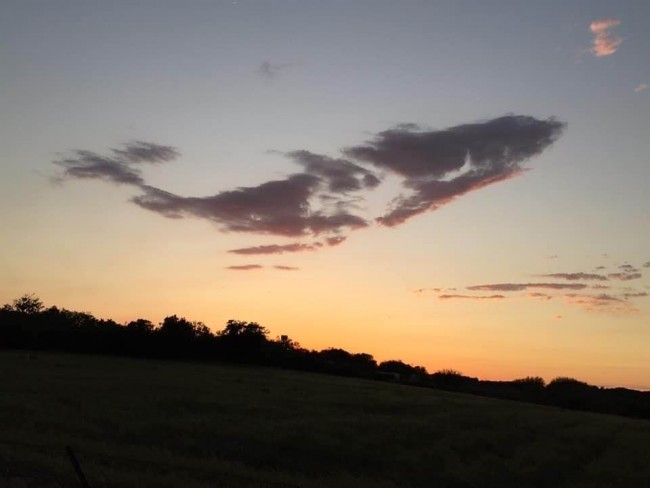 (Photo : From Reddit: Karzdan) Pareidolia of a whale spotted over Texas.

Redditor Karzdan posted on April 26, a photo of a cloud formation seemingly shaped as a whale. The picture initially came from Jeremy M. Alvarado, who posted it on his Facebook account, claiming that he got it from his sister-in-law, whose grandkids snapped the photo while they were out on a stroll.

It was posted under Reddit's subgroup named "Pareidolia," which was meant for posting 'pictures of things that looked like other things.' Various comments about the picture sprouted and sparked conversations among the Redditors.

On the top of the comment section was Reddit user robseraiva who commented, "DONT PANIC." Other Redditors commented, "On no, not again" and "GOJIRA!", humorously saying that the cloud looked like Godzilla, the famous king of monsters.

Anonfamous also posted a comment saying, "See? Due to all the stay at home orders and the slowing of human interference with nature, whales have finally returned to the Texas skies." Governor Greg Abbott has put Texans on a 'Stay at Home' order from April 2 until April 30.

Another comment from access153 read, "That's a major 42 if I've ever seen one." The comment was made in reference to Douglas Adams' claim that the number 42 was the answer to the ultimate question of life, the entire universe, and everything else. He specified this in his book, 'The Hitchhiker's Guide to the Galaxy.'

The psychological wonder that causes some people to see or hear an uncertain or random image or sound as something significant is known as pareidolia.

Derived from the Greek words para, meaning something faulty or wrong, and the noun eidōlon, meaning image, shape, or form, pareidolia is basically like seeing things or faces in unusual places. Pareidolia is a type of apophenia, which is seeing patterns in random situations. An example would be seeing a depiction of Jesus in the clouds.

Scientists say that pareidolia provides a psychological conviction for many delusions that involve the senses. They believe that pareidolia could be behind numerous sightings of UFOs, monsters, and hearing disturbing messages when records are played backward.

Pareidolia often has religious implications. A study found that people who are religious or believe strongly in the supernatural are more likely to see faces in inanimate objects and landscapes.

The American cosmologist and author, Carl Sagan, said that pareidolia was a survival tool. While this instinct allows humans to immediately judge whether an approaching person is a friend or foe, Sagan noted that it could result in some confusion in random images or patterns of light. He said that people might perceive shade as being faces.

A good example of pareidolia and its connection to religious images is the Shroud of Turin. It is a piece of linen cloth carrying the image of a man who appears to have endured trauma consistent with crucifixion. Many people believe it to be Jesus.

Although the whale spotted in the sky in Texas shows no religious implications, it sure makes a good topic and keeps many people entertained despite these trying times.

Also Read: Butterflies and Other Land Insects Could See Dramatic Population Decline Over the Next 30 Years: Study Says