In response to the toxic emissions from fossil fuels that contribute to massive carbon levels in the environment, scientists have been developing various biofuels. Japanese researchers have looked to develop a system of milking algae to produce eco-friendly petroleum. 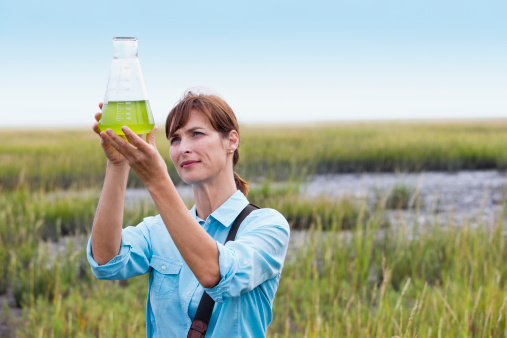 Algae has been a source of various healthy nutrients in food such as seaweed and dietary supplements. At the same time, it has a lot of potential in becoming a competitive biofuel.

As a type of environmentally-friend petroleum, the advantages of utilizing algae include the biofuel as a renewable source of energy. Furthermore, the costs of culturing, collecting, and extracting algae can be countered by a safer way of milking the algae.

Alice Uchida and Masaki Ihara led a team from Shinshu University, Japan in the development of cultivating microalgae while tackling three major issues of milking algae. The first issue in cultivation is culturing.

They discovered that extracting algal cells to create biofuel was possible without killing the organism. Cultivating and multiplying the algae was no longer necessary as they remained preserved.

Second, they chose algae that naturally gathered together, making sample collection much easier. Lastly, the algae released the necessary compounds to make fuel on the cell surface, making them extracellular.

The gathering of polysaccharides (carbohydrates) and phycobiliproteins, proteins soluble in water, were therefore part of a new harmless milking system. Previous milking systems involved milking and culturing simultaneously with the use of organic solvents.

Solvents made of lipids, carotenoids, and other non-polar products increase processing costs. The team's extraction or purification of algae compounds didn't occur with the use of a solvent, immediately cutting processing costs.

The team's first obstacle was finding a specific type of algae that could go through mechanical milking using a shearing disperser, or a glass homogenizer. Through extensive research, they found the Tolypothrix, a type of filamentous cyanobacteria that is commonly found in still waters, rocks, and attached to plants.

Cultivating Tolypothrix continued for two years with minimal cell damage while the team mechanically milked the extracellular compounds. As the algae grew in non-sterile agricultural water, 87 milking cycles produced 90 to 140 milligrams of carbohydrates per liter every 21 days.

Meanwhile, the phycobiliproteins are being used to produce food additives and an ingredient in cosmetics. Scientists from the Ihara lab at Kumamoto University are working on creating algae-derived biofuel in the replacement of petroleum from fossil fuels. For this to be possible, algae milking needs to be achieved on a much larger scale.

Read Also: Phytoplankton Are Causing a 'Significant Regime Shift' in the Arctic Ocean

The Japanese team continues to search through different species of algae that can withstand the milking process. Moreover, they will need to collaborate with various other fields of science including fermentation engineering, algal biomass conversion technology, environmentalists, and forest conservation studies.

ExxonMobil, in partnership with Synthetic Genomics, shared, 'Oil-rich algae are an ideal energy feedstock. Actually, turning small batches into fuel can be done in the lab. The challenge is scale and, specifically, developing industrial processes that can grow and produce enough algae-derived fuel to keep up with the world's growing demand for reliable and cleaner energy.'