In honor of the frontliners during this pandemic, NASA named their new Mars rover Perseverance with the medical symbol of twin snakes entwined on a staff.

Some scientists shared how the new rover will be looking for signs of life on the Red Planet by next year.

Currently, the surface of Mars is hostile and inhabitable. Temperatures are too cold for water to appear on the surface, and the thin atmosphere welcomes in too much radiation. 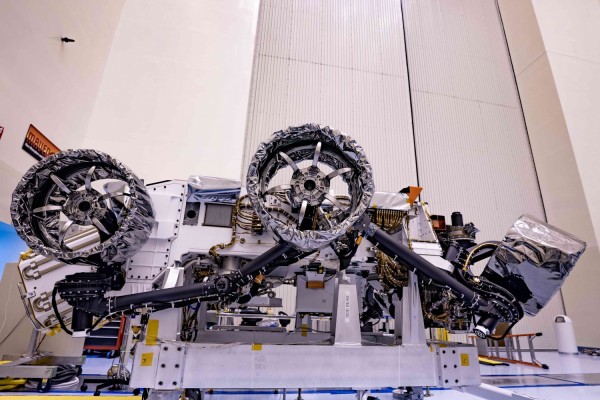 More than 3.5 billion years ago, it was believed that water roamed the surface of the planet. Mars' channels are carved by water and seen in impact craters. And assuming that the carbon dioxide atmosphere was thicker, there was less radiation on the planet.

Scientists began to speculate this as early as the 1970s after the Viking missions analyzed samples of the planet's soil, but the results were inconclusive. By the 2000s, the Mars Exploration Rovers Spirit and Opportunity found geological evidence that water had once existed on the Red Planet.

In 2012, the Curiosity rover discovered that Gale Crater used to be a lake. The rover also picked up organic molecules that contained carbon, the building block of life forms.

Perseverance will be continuing this search for life and will be accompanied by Mars missions from China and the U.A.E.

"I would say it's the first Nasa mission since Viking to do that," said Ken Williford, the deputy project scientist at Nasa's Jet Propulsion Laboratory.

The rover's goal is to search for signs of life at the Jezero Crater. Dr. Ken Williford explains, "there's a river channel flowing in from the west, penetrating the crater rim, and then just inside the crater, at the river mouth, there's this beautiful delta fan that's exposed. Our plan is to land right in front of that delta and start exploring."

Perseverance will drill into rocks to extract chalk-sized cores and cached in containers, which the rover will leave on the surface. Later on, another rover will collect the samples and deliver them back to Earth as a part of the Mars Sample Return project with the European Space Agency.

Jezero crater is a delta that contains layers of sand, deposit rocks, and possibly organic carbon as it was formed by water. Potentially, the evidence of organic matter may be found between the grains of sand.

Aside from carbon, the team hopes that the rover will be able to detect hydrated silica, a substance that helps preserve microfossils. Dr. Williford explained that microbes are rarely discovered alone, so if Martian microbes are similar to those found on Earth, 'they would have joined together in little communities that build up into structures or clumps of cells that are detectable to the rover.'

Afterward, the team plans for Perseverance to continue upward on the rim of the crater, which can determine how old the lake was. The next goal for exploration is the Syrtis Major region, which is older than Jezero and may also have signs of life.

READ MORE: China Is Getting Ready to Launch a Rocket to Mars