Mobile Device Addiction: What It Is, and Possible Dangers Associated with It 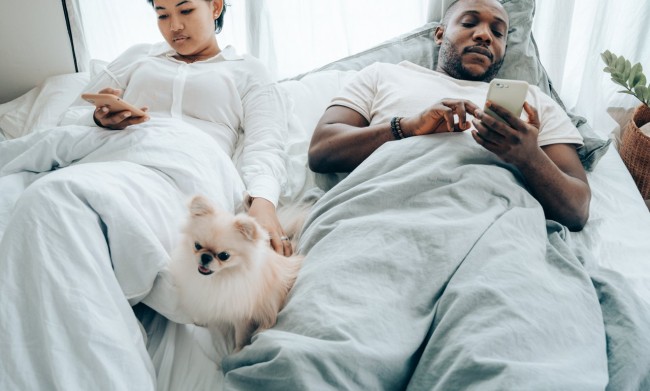 (Photo : Mobile Device Addiction: What It Is, and Possible Dangers Associated with It)

You might have said to a friend before, "I'm completely addicted to my iPhone!" But have you stopped and considered that might actually be the case? It's a little less tongue-in-cheek if you haven't checked your email or watched a YouTube video on your Android in a couple of hours, and you feel yourself starting to get jittery.

Could it be that you're addicted to your mobile device? Is it as addictive as caffeine or nicotine? And what are some potential health risks of using your smartphone too much, or being deprived of it?

Those are the questions that we will endeavor to answer in this article.

Before we get into health risks related to mobile device addictions, let's talk about what medical science says about all this. Studies indicate that:

You're not going to go into withdrawal symptoms if someone takes your cellphone from you like you would if you have a heroin addiction. At the same time, the symptoms are every bit as noticeable in some people as if they don't have their eight o'clock cigarette or morning cup of coffee.

You can become irritable and even belligerent if someone takes your mobile device. You might not be as interested in activities that you once enjoyed. Your creative thinking ability might be adversely affected.

That's far from the worst behavior possible, though, if someone takes away your mobile device for an extended time. You might:

Again, all of this is consistent with addiction. Some people feel that they need to play Candy Crush or their game of choice for a certain amount of time every day. If they don't do that, they don't get the serotonin release that comes with that activity.

Maybe you use your smartphone to check the news often. Perhaps you want the latest pandemic or presidential election news.

With what's happening in this country, and the world, your mobile device can feel like a lifeline to what is going on. Without checking it every few minutes, it's easy to see how you might get anxious. That's even more true if you already had depression issues before you got your cellphone, tablet, or other chosen device.

You're probably not going to suffer a heart attack or stroke if someone takes your phone away. However, don't discount some of the physical and mental conditions that we've described as related to this issue.

If you feel stressed without your mobile device, then that's not healthy. When you have it, you can easily lose track of time surfing the net, playing games, or otherwise occupying yourself.

You might miss appointments. Maybe you were meant to pick your kids up at school, but you forgot. That's not a physical risk, but you're risking your healthy relationships with those around you.

You also might get combative if someone tries to take the phone away. Maybe you're at work, and your boss catches you using the device when you should not be.

If they try and take it or make you put it away, you might lash out at them. That could cost you your job.

These scenarios might sound farfetched, but they're not. Think of it: when was the last time you went a whole day without using your phone for something, if not many things? How does that prospect sound to you?

The thing about mobile device addiction is that even though many people have it, they don't realize it.

They know that they use their phone or tablet a lot, but they probably don't think about how much time it amounts to every day, or what they'd be like deprived of that device.

The way to combat mobile device addiction is to be aware of it and to take some time away from your phone purposefully. You might decide that after a particular time of the afternoon, you're not going to use the device anymore.

Instead, you'll spend time with your family from that point forward. You might play with the kids, talk with your spouse or significant other, or meditate. You may take a walk in the woods or a bike ride.

Admitting You Have a Problem

Much like alcoholism or other drug use, it's going to be up to you to moderate your behavior related to your devices. Your family isn't likely to intervene, although maybe they will if your conduct is bad enough.

Still, even if no one is calling you out about your behavior, you must acknowledge that too much mobile device time can harm you. It's not healthy to have such an attachment to an inanimate object.

You can do some experiments and see what your days are like when you limit your mobile device use. If you do okay with it, then you needn't worry as much. But if your anxiety rises when you don't have your phone, you know that you need to take action without delay.

Many individuals don't realize how much their stress level ties into technology use. Tablets and smartphones are so much a part of our lives that we cease to think of ourselves as being separate from them. We don't seem to be far from the sci-fi notion of human and machine melding together.

Ultimately, you need to plan out your days to limit your mobile device use. Many studies indicate that those who spend less time on their phones or tablets feel less stressed and more relaxed.

It's critical to take these steps. If you don't, then the situation is likely to get worse without you even realizing it.