SpaceX, NASA On the Lookout Before Endeavor Splashdown

SpaceX and NASA are monitoring a potential tropical cyclone in the Atlantic, ahead of the astronaut crew scheduled to splash down on Sunday, August 2.

The NASA astronaut crew onboard the SpaceX Crew Dragon capsule, Endeavor, is set to make a splashdown in the Gulf of Mexico, off the coast of Florida, on Sunday afternoon. NASA astronauts Bob Behnken and Doug Hurley have finished their historic test flight. For two months, Bob and Doug have made the first orbital trip manned by astronauts, using a commercial spacecraft.

A Milestone for the Commercial Crew Program

Another historic point in the latest SpaceX - NASA mission is that the Sunday splashdown marks the first piloted re-entry of a Crew Dragon spacecraft, as well as NASA's first ocean landing in 45 years. The last splashdown by American astronauts was the July 1975 Apollo-Soyuz mission, the US-USSR joint space mission.

RELATED: SpaceX All Set to Launch First Crewed Flight from US Soil in Nine Long Years

According to the NASA Schedule, on Saturday, August 1, the SpaceX Dragon Demo-2 will conduct a farewell ceremony from the International Space Station (ISS) at 9:10 AM. By five in the afternoon, the Crew Dragon is set to undock, with the event covered by NASA TV.

The latest SpaceX and NASA collaboration marks a new leap for the NASA Commercial Crew program. Since 2011, the space agency has teamed with US aerospace companies to help launch astronauts on rockets and spacecraft. Together with its commercial and industrial partners, the Commercial Crew program aims to achieve safe, reliable, and cost-effective transportation to and from the International Space Station. In the future, the increased opportunities will set the springboard for future Moon and Mars missions.

Aside from the above-mentioned achievements, the recent test flight will help NASA certify SpaceX's crew transportation system. Should the aerospace company get certified, it will have regular manned flights carrying astronauts to and from the ISS.

"Everybody remains 'go' for a return, and we cannot wait to get Bob Behnken and Doug Hurley back to Earth, but of course, we have some weather pending," NASA Administrator Jim Bridenstine said in a statement to the press on Wednesday, July 29, from Florida's Kennedy Space Center. He added that they "look forward to seeing if that's going to be within the realm of what is possible."

Tropical storm warnings were already issued to some parts of the Lesser Antilles and the Caribbean as a weather disturbance, eventually to be named Tropical Storm Isaias, could even reach Florida over the weekend, casting a cloud of uncertainty in the Crew Dragon splashdown. 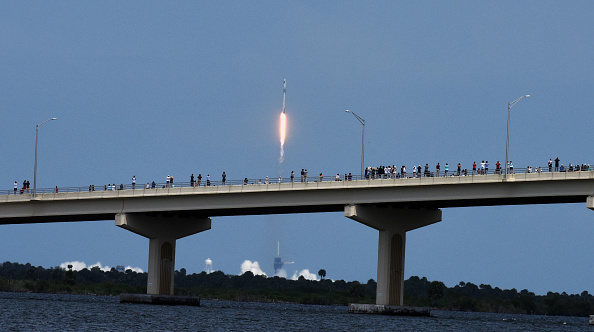 (Photo: Photo by Red Huber/Getty Image)
TITUSVILLE, FL - MAY 30: People line the A.Max Brewer Causeway to watch the launch of a SpaceX Falcon 9 rocket from Cape Canaveral, Florida May 30, 2020, in Titusville, Florida. American astronauts Bob Behnken and Doug Hurley are aboard the crew Dragon capsule on a mission to link up with International Space Station.

The National Hurricane Center, or NHC, has recently dubbed the developing system as "Potential Tropical Cyclone Nine" on Tuesday, July 28. This move from the NHC is a precaution, issuing advisories and weather warnings ahead of time. Based on the trajectory of the disturbance, the storm is set to reach Florida on Sunday, a little before the estimated splashdown time of 2:48 PM EDT.

"We're going to watch the weather very carefully," NASA Commercial Crew Program manager Steve Stitch said. He explained that they have a series of sites and are watching the tropical storm. "We'll kind of take it day-by-day," Stitch added.