An Unknown 15-Foot Creature Washed up on Merseyside, UK Beach

Locals are left puzzled as a 15-foot creature from the ocean washed up on Merseyside beach in Liverpool UK.

The unidentified beach creature, with "fur" and "flippers," has led the locals to speculations - from woolly mammoths to walruses, to even aliens. It was found decomposed and covered in flies. It also gave off an awful smell, according to locals.

According to one of the witnesses interviewed by the British publication Daily Mail, it was "very bizarre," The man added: "It's like a mishmash of different things in one."

Another witness inferred that the still-unidentified being was most likely giving birth to another creature attached to it by what appeared to be an umbilical cord. 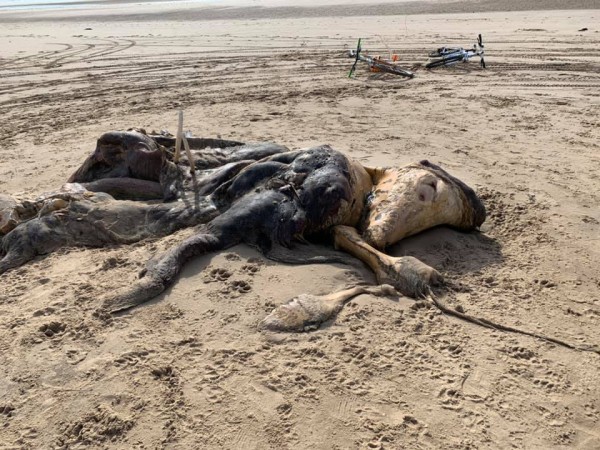 However, Natural England, in charge of the Ainsdale Sand Dunes National Nature Reserve also in Liverpool's Merseyside beach, has provided their answer to the Merseyside unidentified creature.

"We can confirm that an animal in a poorly decomposed state has washed up on Ainsdale beach and whilst the identification of the animal is unconfirmed it appears to be a species of whale," said Stephen Ayliffe. Ayliffe, the Senior Advisor at Natural England, told the local publication The Echo.

"We are working with an animal removal company to have the animal's remains removed from the beach as soon as possible."

Whales, among the largest creatures in the oceans, are also mammals. They give birth to their young out of eggs, unlike fishes. Also, their offspring also have belly buttons since they are nourished during conception through umbilical cords, such as what might be found on the Merseyside beach creature.

Whale mortalities are mostly caused by human activity. A report published in the journal Diseases of Aquatic Organisms back in June 2019, inquired as to the deaths of 70 North Atlantic Right Whales, an endangered species of baleen whales that averages 14 meters as an adult. In a 16-year study from 2003 to 2018, 43 of the 70 deaths were conclusively determined. Almost 90% of that number died from human activity-related causes - entanglement from fishing lines and vessel collisions, such as whales hitting boats and yachts.

Comparing 2003-2018 to much older historical data from the 1970s revealed that whale death from entanglement alone has increased from 21% to 51%. Line entanglement causes wires from the fishing lines and net to wrap around the whale's face, head, mouth, flippers, or tail. Aside from incapacitating the whales with the lines restricting their movement, wires can also lacerate and slice up whales.

The authors of the study made a few recommendations to the fishing industry to mitigate whale deaths caused by line entanglement and vessel collision incidents. It included the propagation of ropeless fishing practices, especially in the US and Canada where the particular species are most observed. The study also looked at implementing marine vessel restrictions on speed, as well as dynamic management strategies for fishing in the area.

At the time of the study, only a little over 400 North Atlantic Right Whales exist.

To see a Sperm Whale giving birth, watch below:

Check out more news and information on Rare Occurrences on Science Times.