After 62 days at the International Space Station, NASA astronauts and Crew Dragon have finally returned to Earth. Bob Behnken shares his experience of returning home vividly.

When the spacecraft Endeavour hit Earth's atmosphere, all the separation events felt like a sudden crack or getting 'hit in the back of the chair with a baseball bat.' said Behnken. He was surprised by how fast everything transpired, from their de-orbit to seeing clouds rush by then finally landing in the Gulf of Mexico. 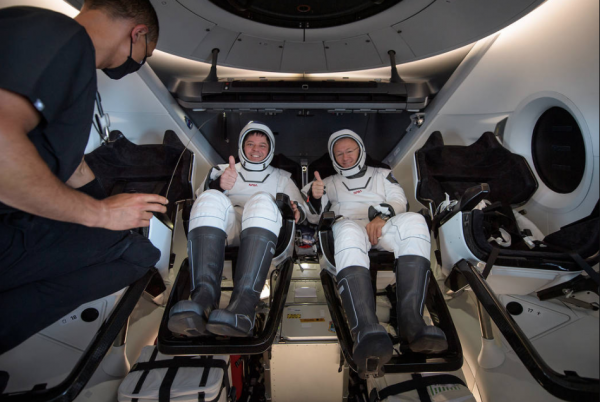 Behnken described how Dragon Endeavour 'came alive' as they descended into the atmosphere. He also talked about how the loud rumble outside the spacecraft, which the team felt like a 'shimmy' in the body - little motions they have 'picked up on inside the vehicle.'

As the thrusters were firing continuously, the sound it made sounded more like an animal rather than a machine, according to Behnken's audio recording. While the trunk separations felt light and smooth, the transition to parachutes for landing had a 'pretty significant jolt.'

Alongside Doug Harley, the pair were very grateful for being a part of this journey. Behnken expressed his gratitude towards the engineers of Crew Dragon and how well-trained they were by the SpaceX team.

'Perfect Day' for a Splashdown

This marks the first crewed water landing or splashdown in the United States since the Apollo 17 splashdown in 1972. Behnken's and Hurley's capsule hit the waters of the Gulf of Mexico at 14:48 EDT on August 3.

The private boats in the waters that came close to the capsule were not anticipated. NASA's Jim Dridenstine said that it was not safe for civilians to be that close with the rocket's nitrogen tetroxide in the atmosphere. 'We need to make sure that we're warning people not to get close to the spacecraft in the future,' he said.

Steve Stich, manager of NASA's commercial crew program, said that it was the 'perfect day to a land' with a clear sky, calm waters, and little wind. Everything went smoothly from their splashdown to allowing the nitrogen tetroxide vapor to clear and medical checks on the two astronauts.

The Future of Human Spaceflight

With SpaceX and NASA completing the test flight Demo-2, it marks a new beginning for human spaceflight. 'NASA is no longer the purchaser, owner and operator of all the hardware,' shared Dridenstine. Instead, they will a customer of Elon Musk's SpaceX as space exploration becomes commercialized said Dridenstine during the splashdown news conference.

Aside from the de-orbit, re-entry, and recovery of Behnken's and Hurley's capsule, the third objective of the spaceflight was to carry back cargo from space, said Stich. The two freezers onboard the Dragon contains 'valuable science.'

Gwynne Shotwell, SpaceX's President, and Chief Operating Officer said, 'We are starting the journey of bringing people regularly to and from low-Earth orbit and onto the moon, then ultimately onto Mars.' The completion of Demo-2 will be a 'springboard' for upcoming missions. NASA's next project is completing the Artemis program, sending the next man and first woman to the Moon.

Read Also: Ingenuity: The First Helicopter To Fly on Mars | Watch the Broadcast