One of the most popular footwear items, the flip-flop, also accounts for a significant part of plastic waste found in landfills and bodies of water - and a biodegradable material for these slippers might be the answer.

A team of scientists from University of California San Diego have formulated polyurethane foams made from algae oil. The methodology and results of their study are published in the latest Bioresource Technology Reports, detailing the development of these algae-based materials. 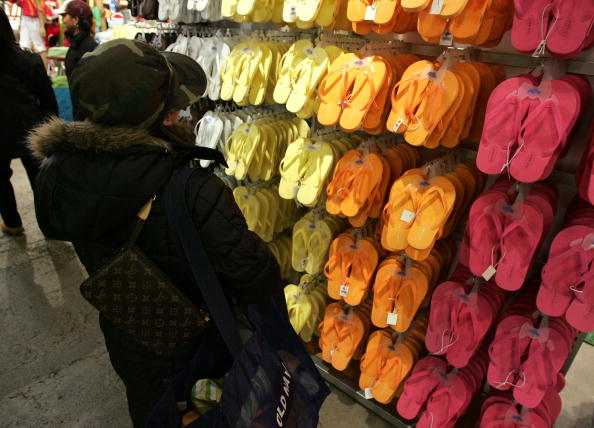 (Photo : Photo by Peter Kramer/Getty Images)
NEW YORK - APRIL 3: Men, women and teens line up at Old Navy on 34th Street to try to become the next national flip-flop foot model, the winners feet will be seen in Old Navy's circular and will win 365 pairs of flip-flops on April 3, 2005 in New York City.

The new material is reportedly compliant with commercial specifications set for the footbed of flip-flops, as well as for midsole shoes. However, the team maintained a structure that maintains the biodegradability of the algae flip-flops.

Their polyurethane foam - composed of algae-based linear polyester polyols - was tested on their biodegradability. Generating 2cm cubes, they incubated their samples in a compost environment and a soil-only environment. Afterwards, the samples were weighed and subjected to compression testing. A set of control samples were placed in empty containers and similar conditions - temperatures under 30°C and high humidity.

During the testing periods at four, eight, and twelve weeks into the study, researchers observed the degradation of the polyurethane cubes. Aside from all sides of the cubes becoming increasingly porous over time, another key sign of degradation was the discoloration. The control cubes maintained their white colors while the test samples turned brown for the compost environment and yellow for the soil environment. The team noted that the difference in color might be caused by the organisms native to the test environment.

A Step Towards Environmentally Sustainable Materials

"The paper shows that we have commercial-quality foams that biodegrade in the natural environment," Mayfield said. He added that the foams, which are 52 percent biocontent, already meets commercial specifications. He added that "eventually we'll get to 100 percent."

The latest breakthrough, according to Burkart, is a part of an ongoing series of studies that aims to offer a complete solution to the plastics problem.

RELATED: Biodegradable Plastics May Not Be As Environmentally Friendly Once Thought

"We took the enzymes from the organisms degrading the foams and showed that we could use them to depolymerize these polyurethane products, and then identified the intermediate steps that take place in the process," Mayfield explained. The UCSD professor added that the depolymerized materials can be synthesized again to create new polyurethane monomers, completing what he called a "bioloop."

According to the UCSD press release, failing to address the plastic problem will result in 13 billion metric tons of plastics - either in landfills or natural environments - by 2050. Robert "Skip" Pomeroy, a member of the UCSD Chemistry and Biochemistry Department, plastics have been accumulating since these materials were first developed about 60 years ago.

To see another part of the UCSD longstanding commitment to solving the plastic problem, watch as they use algae to create surfboards below: