Elephants are widely known for their long, off-white tusks on both sides of their trunks. These tusks are essential for their survival, but what are they exactly?

Ivory tusks are massive teeth that protrude beyond the mouths of the elephants and are deeply rooted. Much of it is made of dentine—a hard, dense, and bony tissue. But the whole tusk is wrapped in enamel, which is the hardest animal tissue.

However, some people are interested in these ivory tusks, and many illegally trade them internationally. Various governments and world organizations have worked hand in hand to eradicate these practices.

On the eve of the World Elephant Day, Singapore has started crushing nine tons of confiscated ivory—the largest action in the world in recent years. The confiscated elephant tusks included those from more than 300 African elephants. 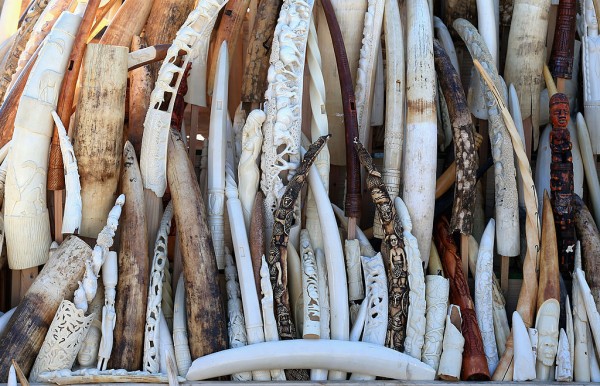 (Photo: Doug Pensinger/Getty Images/File photo)
COMMERCE CITY, CO - NOVEMBER 14: A sample of the six tons of ivory confiscated by the U.S. Fish and Wildfire Service is on display during the U.S. Ivory Crush event at the Rocky Mountain Arsenal Wildlife Refuge on November 14, 2013, in Commerce City, Colorado. The stockpile of African and Asian elephant ivory seized by FWS law enforcement officers since the late 1980s is being pulverized by a rock crusher.

The Largest Crushing of Contraband Ivory in the World

According to Singapore's National Parks Board, the destruction by an industrial rock crusher aims to prevent the items from re-entering the market and disrupt the global supply chain of illegally traded ivory.

Moreover, the spokesperson said that it would take roughly three to five days for all the ivory seized between 2014 and 2019 to be crushed. They are planning to incinerate the ivory after it was crushed.

"This ivory crushing event, the largest globally in recent years, demonstrates Singapore's strong determination and commitment to combat the illegal trade in wildlife," they said.

The contraband tusks included 8.8 tons of ivory confiscated in 2019 during Singapore's largest haul worth US$13 million (Sg$17.6 million).

Singapore has launched the Center for Wildlife Forensics on Tuesday, with the aim to identify and classify specimen involved in the illegal trade of wildlife.

Their methods in determining where the items were poached from include using DNA analysis and other different types of procedures. In this way, it could help fight the illegal wildlife trade.

[GRAPHIC VIDEO] Elephant Searching for Food Dies After Electrocuted by a Fence of a Mango Farm in Thailand: Watch

What is ivory for, and why is it illegal to trade?

Elephant tusks are much coveted because they can be made into combs, pendants, and other exotic jewelry. Governments around the world have outlawed the practice of elephant ivory trade since 1989 after the population of African elephants decreased from millions in the mid-20th century to only about 600,000 by the end of the 1980s.

The act has deemed illegal because, in every piece of ivory, there is a dead elephant. In a single year, about 20,000 elephants are killed by poachers for their tusks, which are illegally traded into the international market, ending up as ivory trinkets.

The trade is mostly fueled by the high demand for ivory in some parts of Asia. Many organizations call out to countries with high demands for ivory such as China, Vietnam, Thailand, and the United States to strengthen their law enforcement and commit to long-term elephant ivory demand reduction efforts.