Friendly Sharks? A New Study Shows They Also Make Friends With Other Sharks

Sharks are generally known as solitary creatures. They typically live deep in the sea, in a world that is inaccessible to humans, and hunt by themselves, only joining up with other sharks for certain circumstances, such as mating.

But there are also times when they form schools baffling scientists as sharks need not any protection from predators, and they do not feed in schools. But a new study suggests that these sharp-toothed predators may have been making friends with other sharks after all. 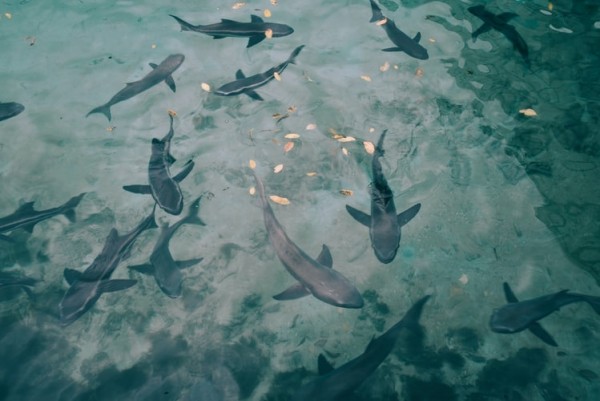 New research published in the Proceedings of the Royal Society B: Biological Sciences said that sharks could be forming large social groups and only breaks off to forage, then return again. They also claim that some sharks of this group form bonds in pairs that last for several years.

The researchers think that this bond between sharks is more than just being nice since it could also be due to the accidental sharing of information. Knowing this would help in understanding how the shark's flexible and long-term societies evolve.

In their paper, the researchers wrote that shark communities display temporally stable and complex social structures than seabirds and perhaps in some animals as well.

"While the importance of social information in colonial birds and mammals is now well established, we show that these concepts likely also apply to some species of shark," the researchers said.

For example, the gray reef sharks (Carcharhinus amblyrhynchos) usually create a home base that they can come home to and rest. Sure, they venture fairly far afield to forage, but these sharks are not wanderers because they return home.

This confuses the scientists even more, so they decided to analyze the movements of the gray reef sharks. The team was led by shark biologist Yannis Papastamatiou of Florida University wanted to see if they could figure out the reason for these sharks to keep returning "home."

The team tagged 41 sharks and tracked their movements in Palmyra Atoll from 2011 to 2014, in which they learned that sharks behave like central foragers.

But seeing their data once again made them think that perhaps the sharks' movements could be connected to their social dynamics.

They put together their data on how the sharks move around, the time spent in their base, and which of them moved. Then they created dynamic social networks based on the assumption that those sharks hanging out together are socially connected. Their study led them to the identification of 972 significant clustering events.

Their observations revealed that sharks exhibit a fission-fusion society or behavior, in which they form social groups and split off to forage. Moreover, it also revealed that gray reef sharks would head out at night to hunt then return during the day.

They have also identified some pairs that continued to associate with each other for the entire four-year research. Although the researchers have stopped gathering data by 2014, they believe that the association would have lasted for more years.

However, the school of sharks has a limitation because if they grow too large, there will be competition for food, outweighing the benefits of information sharing.

This type of social behavior, among other animals, has been well understood for many years now.

It's fascinating reading, and not just because of what it means for our understanding of sharks. Papastamatiou and his team's work shows that there could be other reasons for social bonding that people might least expect.