AeroNabs: A Novel Protection Against COVID

A new synthetic and inhalable substance is the next promising cure against COVID-19, reported in the latest bioRxiv Tuesday, August 11.

A team led by the University of California, San Francisco (UCSF) have developed an aerosol formation, which they called "AeroNabs." The molecules in AeroNabs "straitjackets" the crucial SARS-CoV-2 machinery that allows the virus to infect human cells. Results of the study, awaiting peer-review certification, are now published on the preprint server bioRxiv. 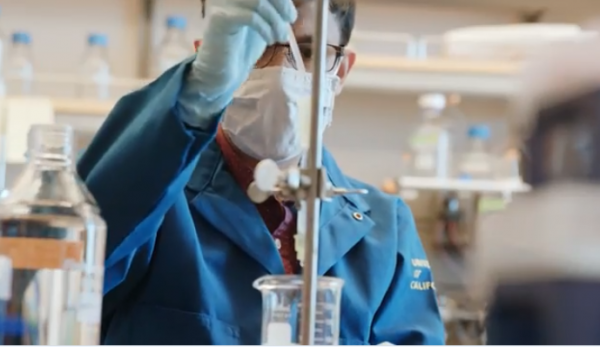 (Photo: UCSF YouTube Channel)
As the world awaits vaccines to bring the COVID-19 pandemic under control, UC San Francisco scientists have devised a novel approach to halting the spread of SARS-CoV-2, the virus that causes the disease.

SARS-CoV-2, the highly contagious disease behind the global coronavirus pandemic, begins infecting human cells through its Spike protein. This Spike protein interacts with the receptor angiotensin-converting enzyme 2 (ACE2), a protein found on the surface of several cell types in the human body. As an enzyme, it splits the larger protein angiotensinogen into smaller proteins that then regulate a number of cell functions.

Through the virus' spike-like protein on its surface, it binds to the ACE2 receptor and begins infecting other cells after ACE2.

The UCSF research team notes that interrupting this interaction is a potent method for neutralizing the entry of the virus to the body, creating possibilities for vaccine design and therapeutic antibodies.

Researchers developed a single-domain antibody, or a nanobody, that "disrupts" the interaction between the human ACE2 receptor and the SARS-CoV-2 Spike protein. By screening a number of synthetic nanobody sequences, they found a panel of these nanobodies that binds and wraps the Spike.

The most effective of which was a nanobody labeled Nb6, later developed to its trivalent form, mNb6-tri, with an affinity for SARS-CoV-2 Spike. During testing, researchers found out that the trivalent nanobody remains stable and functional even after aerosolization, lyophilization, and heat treatment.

It means that the new SARS-CoV-2 antibody can be administered directly through a patient's airway epithelia, through the use of mechanisms such as those found in nasal sprays or inhalers. After further testing, the researchers aim to make AeroNabs available as a cheaper, over the counter medication in the prevention and treatment of COVID-19.

"Far more effective than wearable forms of personal protective equipment, we think of AeroNabs as a molecular form of PPE that could serve as an important stopgap until vaccines provide a more permanent solution to COVID-19," said Peter Walter, Ph.D., co-inventor of AeroNabs and an author in the study. Walter is also a professor of biochemistry and biophysics at the University of California, San Francisco and a Howard Hughes Medical Institute Investigator.

RELATED: COVID 19: Pfizer Teams up With Gilead to Manufacture Remdesivir

The molecules that paved the way to AeroNabs were inspired by nanobodies - proteins much like our antibodies, and occurring naturally in llamas, camels, and the like. "Though they function much like the antibodies found in the human immune system, nanobodies offer a number of unique advantages for effective therapeutics against SARS-CoV-2," explained Asshish Manglik, MD, Ph.D. Manglik is a co-inventor of AeroNabs and an assistant professor of pharmaceutical chemistry.

For starters, nanobodies are remarkably smaller compared to our antibodies, making them easier to work within laboratory settings. Since they are smaller, nanobodies also often employ simpler structures that mean more stability compared to the more complex human antibody.