Dark matter remains one of the most mysterious occurrences in the known universe, and a new artwork helps explain how it interacts with light.

A new interactive art installation, called "Dark Distortions," is now at display at the Science Gallery of Trinity College Dublin. Created by the Dutch artist Thijs Biersteker from Woven Studio, this dark matter project is the latest in his science-oriented works. 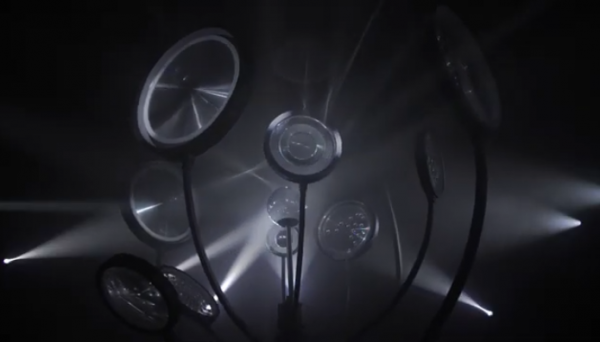 RELATED: Did You Know? Dark Matter Is Causing the Gamma Radiation Plaguing the Universe

According to the installation's page in Biersteker's website, Dark Distortions was made in collaboration with Henk Hoekstra, a cosmologist from the Leiden University, and the European Space Agency, or ESA. The work is inspired by the agency's upcoming Euclid mission that seeks to study dark matter and dark energy once it is launched by mid-2022.

"We go for abstraction. We have a model of the universe that is very abstract and far from how our senses experience the world," Hoekstra said. He added that Dark Distortions tries to take the abstract concept and make it something that connects to the audience's senses.

The installation is made of a constellation of moving lenses, bending light similar to how large concentrations of dark matter become gravitational lenses. Gravitational lensing happens when an object of great mass, such as galaxies and dark matter, distort or bend light. It was the same phenomena that allowed the Atacama Large Millimeter/submillimeter Array (ALMA) to locate a distant galaxy similar to our own Milky Way.

In an ESA press release, Biersteker said that his artwork uncovers the unseeable nature of dark matter in front of the viewer's eyes. With Dark Distortions, visitors at the Science Gallery can better appreciate how significant discoveries in science can be both complex and simple.

The existence of dark matter has been hypothesized since at least Lord Kelvin's time. In one of his talks, in 1884, he concluded that the majority of our stars might be dark bodies, after determining that his estimated mass of the galaxy is different from the total mass of visible stars.

According to the modern cosmological models, dark matter is believed to account for as much as 85 percent of the universe. Astrophysicists throughout the years speculated about this "missing mass" after observing large bodies and finding out that these galaxies appeared to have far more mass based on the gravitational force it exerts on the bodies around it.

Unfortunately, despite theories and models pointing to the existence of dark matter, direct evidence to conclusively prove them remains elusive. So far, only its influence, by interacting with normal matter via gravitational force, is observed by scientists.

The ESA Euclid mission is an astronomy and astrophysics mission that aims to understand the accelerating expansion of the universe. Since dark energy and dark matter are critical parts of this cosmological phenomenon, it will be essential to observe its influence—to confirm whether the accelerated expansion is due to dark energy or some other form of General Relativity.

Dark Distortion was originally scheduled to run from March 13 to May 31 but was forced to close because of the global coronavirus pandemic. It is now extended until October 25.