This New Space Salsa Is Out of This World

Danny's Rocket Ranch Space Salsa is here to heat the world of astronaut ice cream and other freeze-dried space food. Created by Danny Jacques, a retired teacher, and self-proclaimed "space geek," this new spicy space food can be eaten on Earth and far beyond the space!

Jacques said that his salsa is his southwestern recipe, adapted for space flight for the astronauts. "Using space-age technology, the freshness of this tasty salsa has been frozen in time - ready to be unlocked and enjoyed anywhere ... the moon, Mars, or in your home!"

A part of the total sales of the Space Salsa will be given to support children going to Space Camp at the US Space & Rocket Center in Huntsville in Alabama, in which Jacques was inducted into the Hall of Fame in 2010. 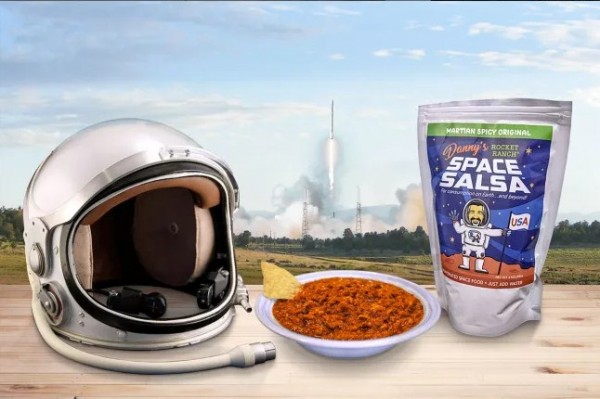 Will the astronauts enjoy it?

For over 30 years, Jacques has been making fresh, terrestrial salsa for his family and friends. Until in 2018, during the Space Camp pool, Jacques had an incredible idea of sending his salsa to space.

He spoke with fellow Space Camp alumni, geologist and educator Dottie Metcalf-Lindenburger, who became a NASA astronaut launched in the space shuttle Discovery to the ISS in 2010.

He remembered asking Metcalf-Lindenburger whether astronauts would like his salsa on the ISS, and from that moment, he already thought of ways in making it come true to raise money for Space Camp scholarships.

Metcalf-Lindenburger encouraged Danny for his idea as she, herself, enjoyed his salsa very much during the Hall of Fame reunion. She said that astronauts prefer spicy food in space such as Tabasco, salsa, sriracha sauce, garlic paste, pesto, wasabi, and other spices as it provides the strength of flavor that they enjoy.

Astronauts might well appreciate Jacques' salsa recipe because of its spicy taste. The sense of taste of astronauts is greatly affected by microgravity, which dulls the flavor of many foods, so Jacques formulated his salsa thick enough to stick to the food.

READ: When the Astronauts Get Sick in Space, What Does NASA Do?

For Earth and Beyond

The first step Jacques did was dehydrate the ingredients but then discovered that he could source it as individual freeze-dried products. His ingredients include tomatoes, green chili, onion, garlic, and after combining with his blend of spices, it was just a matter of deciding the amount of water needed to refine the flavor of the salsa.

Jacques said that he has a 'Martian Mild' and 'Martian Hot' salsas already in the pipeline. He converted a portion of his property in Ignacio, Colorado, to become his "Rocket Ranch," a commercial kitchen for mixing and packaging of his salsa.

Jacques is selling a packet of his Space Salsa for $6.49 each and will be for sale in some stores at Colorado, at Space & Rocket Center, and online.

He believes that his Space Salsa is unique to other dehydrated salsa because it is the first salsa aimed not only to be consumed on the planet but also beyond it. Jacques is hopeful that NASA will become interested in his Space Salsa, with a shelf-life of at least two years.