Explore Hallett Cove in Australia, Thanks to Virtual Reality

Created by the Project LIVE team from the University of South Australia (UniSA), together with Framework VR and AusIMMM, the gamified VR experience titled "Beyond the Ice." The VR program allows users to experience the South Australia protected area. 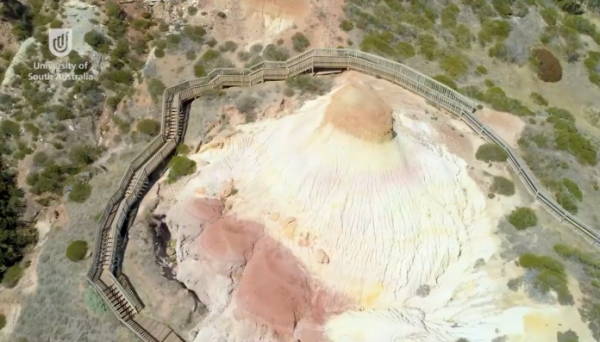 Going "Beyond The Ice"

The Hallett Cove Virtual Tour covers seventeen geological sites from the globally-renowned location. It includes popular tourist spots such as the Hallett Cove Beach, covered in multicolored stones of different shapes and sizes, and the Black Cliff, covered with layers of purple-colored sedimentary rocks. It also includes The Sugarloaf, named for its uncanny resemblance to an unusually large mass of refined sugar, actually made up of glacial sediments softly eroded by wind and rain over a long period of time.

Project LIVE and their partners reconstructed the selected parts of the geological heritage site through the use of 360-degree panoramic shots, drone assisted 3D modeling, and walk-through footage.

It challenges visitors to find and identify fossils with a virtual tool - a hand lens. The guests will also be tasked with measuring glacial grooves with a compass, and trace rock folds and layers surrounding the landscape using digital ink.

Accompanying the VR user is "VT," a handy virtual robot guide that can offer significant information about the surrounding landscape and the user's quest. VT can also assist the user in playing quizzes, starting your own 3D pet rock collection, or even find some of the hidden Easter eggs scattered all around the Australia location.

"Unlike many VR experiences, this is a lot more than some pretty pictures and 3D models are thrown together that don't really offer much as a learning exercise," said Associate Professor Tom Raimondo, a geologist from the University of South Australia and the project leader. Raimondo explained that the virtual reality program is designed as "an interactive, gamified experience" to challenge science enthusiasts to "unlock the geological secrets of Hallett Cove."

While the Hallett Cove Virtual Tour is appealing through its use of modern technology to bring the experience to people despite social distancing protocols and travel bans, Raimondo emphasizes its educational benefits. The UniSA Associate Professor describes the VR adventure as an authentic supplement to fieldwork.

"Fieldwork is the most critical learning experience for any science student," Raimondo said. He also notes that the VR experience allows students to "extend their field skills" to more locations that would have been unavailable otherwise, may it be due to logistic or financial restrictions.

RELATED: Thanks To Virtual Reality: Now You Can Explore Underwater Without Getting Killed By A Shark

The Hallett Cove Virtual Cove is available online, for free. It is compatible with most Steam-VR capable headsets - Oculus Rift and Rift S, Windows Mixed Reality HMDs, HTC Vive, Pro and Cosmos, and Valve Index headsets. In the VR experience's website, a 360-degree walk-through and an aerial geotour are available, giving a sneak peek of the geo-challenge's immersive and educational experience.

Check out more news and information on Virtual Reality on Science Times.