Dubai is determined to start its green revolution through its ultra-modern vertical farm in the middle of the desert. The country decided on this project, hoping to end its dependency on food imports.

One of the vertical farms in Dubai, Al-Badia market garden farm, grows a range of vegetable crops in a multi-story set-up. Inside the facility, they make sure that the plants get proper lighting and irrigation while recycling 90% of the water the facility uses.

Basel Jammal, the farm's director, said that their project is a green revolution located in the middle of the desert. It is as if the crops were a guest in a five-star hotel complete with amenities essential for its survival: the right amount of light, humidity, heat, and water. 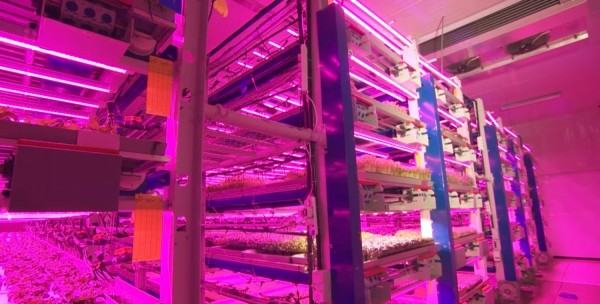 (Photo: YouTube)
Inside the futuristic indoor farm that could revolutionize agriculture in the UAE Screenshot from YouTube

The United Arab Emirates relies heavily on food imports, and Dubai is no exception to that. However, food security is of concern, especially in a region where geopolitical tensions may arise unexpectedly.

The UAE started buying and leasing agricultural lands in east Africa and in other countries to prevent food shortages even in times of crisis more than ten years ago, . But they aim to eradicate dependence on food imports, giving birth to different agricultural strategies, such as stockpiling and ultra-modern agriculture.

Jammal said that his farm is the "choice for the future" as high-tech computers control the facility. They aim to produce their own crops all year round without relying on imports, or worrying about climate change, drought, or rainfall.

Several vertical farms have also started in Dubai in the past years, such as in less-developed areas in Al-Ain and the mountainous Ras al-Khaimah.

Abdellatif al-Banna uses the hydroponics technology in growing his pineapples that he sells online. He experimented with growing fruits, vegetables, and wheat on his farm. Even in colder months, he was able to produce enough grain for his family in what he hopes as a prototype.

Meanwhile, in an area not far from the skyscrapers of Dubai is a farm that cares for cows in air-conditioned sheds, helping the local market to produce dairy products. They were also rearing salmon in large tanks overseen by a control room despite the scorching heat outside the farm.

Dubai Has More Than Enough Food for the Entire Country

Although these vertical and high-tech farms are privately owned, the government is even encouraging such innovations, said Dubai's Food Security Committee chair Omar Bouchehab.

The Emirati government has launched a plan to raise agricultural production in Dubai by 15% in 2021 and boost using agricultural technologies, Bouchehab said.

AT THE BEGINNING OF THE PANDEMIC, Dubai did not experience shortages in food supplies, unlike other countries that saw shelves stripped of tinned goods, pasta, and toilet papers. It's all thanks to the airborne cargo services of the giant carrier Emirates. The country even promised to re-export various goods to its neighboring countries.

"Dubai has an adequate infrastructure and a stock capable of meeting the needs of the United Arab Emirates, and even the needs of neighboring countries," said Fresh Market Executive director Redha al-Mansouri.