We Are Nowhere Near COVID-19 Herd Immunity, WHO Warns

The World Health Organization (WHO) warns that the world is nowhere near attaining herd immunity against the novel coronavirus disease (COVID-19).

The statement shooting down the convenient coronavirus solution came from Dr. Michael Ryan, the Irish surgeon also serving as the executive director for the WHO Health Emergencies Programme. 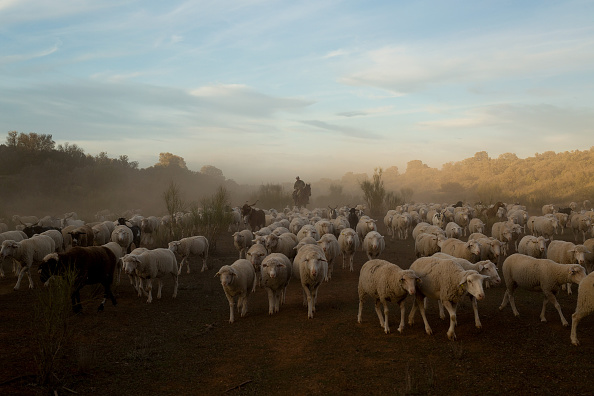 (Photo: Photo by Pablo Blazquez Dominguez/Getty Images)
CIUDAD REAL, SPAIN - NOVEMBER 20: A shepherd guides the sheep and goats herd along the Canada Real Conquense o de los Serranos on November 20, 2015 near Socuellamos, in Ciudad Real province, Spain. By thinking of a human community as a herd, having the majority of them become immune to a disease essentially eliminates the risk of transmission of a contagious disease, like COVID-19, offering indirect protection to the small part of the group without immunity.

"Not a solution we should be looking to."

"As a global population, we are nowhere close to the levels of immunity required to stop this disease transmitting," Dr. Ryan said during a press briefing from the WHO Headquarters in Geneva, Switzerland. He added that the people must focus on what they can actually do now and stop hoping for herd immunity.

According to scientists around the world, at least 70 percent of people must first acquire the virus and recover from it to attain herd immunity - refers to a state when the majority of a population has gained immunity to a contagious disease, providing indirect protection to the minor part of the population who has not yet contracted the disease. Also, to achieve herd immunity, there are two ways - infection or vaccine.

The Johns Hopkins Bloomberg School of Public Health states that it requires 70 to 90 percent of a population to achieve herd immunity, depending on how contagious the infection is. Their Q&A article notes that despite this, an infection can continue circulating in a population - through its children and those whose immune systems are compromised.

A part of the scientific community offers a more optimistic estimate - herd immunity achievable if at least 40 percent of the population has antibodies against COVID-19. Unfortunately, studies show that only 10 to 20 percent of people actually have the required antibodies, especially in badly hit territories such including the United Kingdom.

The UK was among the first to look at the possibility of achieving herd immunity as its public health strategy. Instead of immediate closure of establishments and widespread lockdowns, the UK opted to suppress the virus with gradual restrictions, attempting to build collective protection in the latter stages of the plan. After projecting how many people will be affected in the following weeks, overwhelming its health care facilities, the country imposed an immediate lockdown.

Recently, the United States has already released a statement echoing the same sentiment as WHO - herd immunity is totally unacceptable. Dr. Anthony Fauci, the country's lead epidemiologist, said that this outcome is only attainable following a massive global death toll. The current coronavirus pandemic in the US is further complicated by its ongoing battles with obesity that is linked with hypertension and even diabetes.

Raz Shaikh from the University of North Carolina believes that it is unlikely that a COVID-19 vaccine tailored to the obese will be available next year. He adds that the prediction is that the first set of vaccines that will become available also won't work on the obese, noting that the condition is related to other medical issues that affect a person's immune system.

To better visualize how Herd Immunity works, watch below video from The Royal College of Pathologists: