Man Shows How Soft a Beluga Whale's Head Is

The Beluga whale is one of the most common species of whales around the world. Known for many attributes such as intelligence and being a friendly species, recent footage showed the relationship between the Beluga whale Dabai and a man from Shenzhen, China. 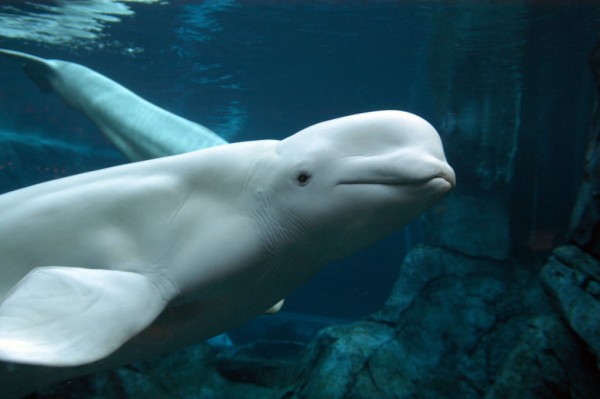 The man, most likely an employee at a local aquarium, has developed a close relationship with Dabai. He was touching and poking the beluga whale's head to show children how soft its head is.

Dabai laughs at the affectionate action. 'Our relationship is very good. It is very good most of the time, but sometimes it is very naughty and will spray water at me,' shared the man.

However, some of the viewers did not approve of the man's actions towards three-year-old Dabai. One viewer commented, 'It's not safe to poke a Beluga's head.'

Beluga whales, which translates to 'white one' in Russian, are the smallest whale species with a large, blunt head with a round structure called a melon. Its melon is right in front of its single blowhole and is composed of fats (lipids) and wax protecting the whale's brain, which makes it soft and squishy as the man in the video had shown.

The melon is also an organ that controls the animal's sound waves when communicating. As the Beluga whale produces sound, the melon changes shape. Beluga whales communicate with sounds such as whistles, clicks, and moos. They can also mimic human sounds and words, making them the 'canaries of the sea' as described by the National Oceanic and Atmospheric Administration (NOAA).

The rest of its body is also covered in thick blubber, and while lacking a dorsal fin, its unique anatomy allows them to live in the Arctic Ocean with temperatures up to 32 degrees Fahrenheit. When the waters become colder than that, they migrate south.

Read Also: How Modern Whales Swim is Linked to the Skeleton of Extinct Dolphin

They are also a protected species under the Marine Mammal Protection Act even though they are not an endangered species. However, there are several threats to their populations such as habitat loss, ocean pollution, decreasing food supplies due to overfishing, and being stranded or beached on shores.

With most Beluga whale populations thriving in near Alaska, Canada, Greenland, and Russia, human activity such as drilling for oil and other factories have contributed to degrading their natural habitat. Even worse, the whales face dangers from contaminants released from industrial processes as well as being vulnerable to oil spills. In a recent study, blubber and liver samples of several whale and dolphin species contained traces of toxicants from plastic waste such as nonylphenol ethoxylate.

Aside from chemical pollution, Beluga whales are also disturbed by noise pollution. Oil and gas exploration, especially in at the Cook Inlet near the Gulf of Alaska, underwater noise disturbs their way of communication through echolocating. Loud noises can also cause temporary or permanent damage to their hearing. Organizations such as the NOAA are working on monitoring and protecting the Beluga whale populations and preserving their natural habitat.

Check out more news and information on Beluga Whales on Science Times.